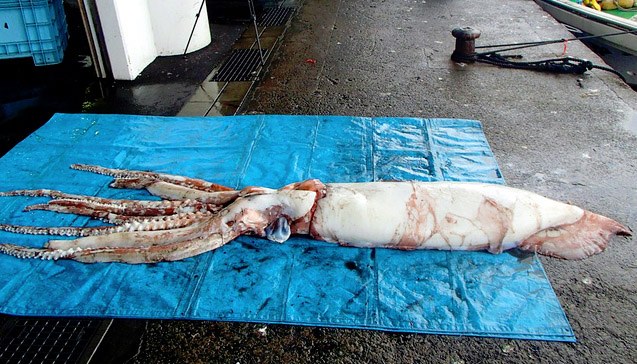 This giant squid was captured off Sado Island in the Niigata prefecture of Japan.  It measured four meters (~13 feet), making it a relatively small giant squid but still a massive cephlapod.  The specimen died shortly after being brought on board the fishing vessel.

We’re kidding about the calamari bit.  According to the Japanese report, no one is going to enjoy eating this squid because of its strong ammonia odor.  On January 9, 2014, the specimen was sent off to the prefecture Fisheries Oceanography Institute for further study.

Here is a link to the original Japanese post complete with video (we are unfortunately unable to embed the video here).

Our thanks to Richard Ross for this awesome link.