The big ones live deep 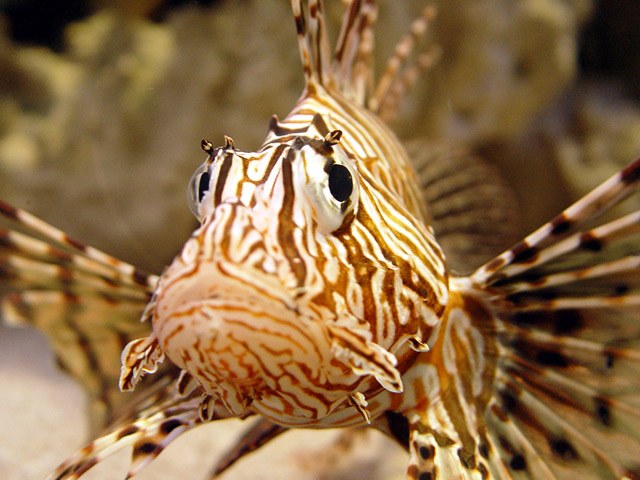 
“We expected some populations of lionfish at that depth, but their numbers and size were a surprise. … This was kind of an ‘Ah hah!’ moment. It was immediately clear that this is a new frontier in the lionfish crisis, and that something is going to have to be done about it. Seeing it up-close really brought home the nature of the problem” stated Stephanie Green, the David H. Smith Conservation Research Fellow in the College of Science at Oregon State University, who participated in the dives.

Ohio State University has been one of the early leaders in the study of the lionfish invasion, and this dive off the coast of Florida drove home the prevalence of this invasive species in Florida waters. The submersible, provided by OceanGate, Inc., named “Antipodes” was used in the study and can carry five people down to depth for research. On this particular dive, it descended down to approximately 300 feet near the “Bill Boyd” cargo ship that was sunk back in 1986 to create an artificial reef for marine life.

“Regarding the large fish we observed in the submersible dives, a real concern is that they could migrate to shallower depths as well and eat many of the fish there. And the control measures we’re using at shallower depths – catch them and let people eat them – are not as practical at great depth” stated Green.

What is particularly scary is the researchers found lionfish up to 16 inches in length in these areas!

Fortunately, Florida has recently removed all restrictions on fishing for this species, so people can now take as many as they want.

Read the full article over at OSU’s News and Research Communications.