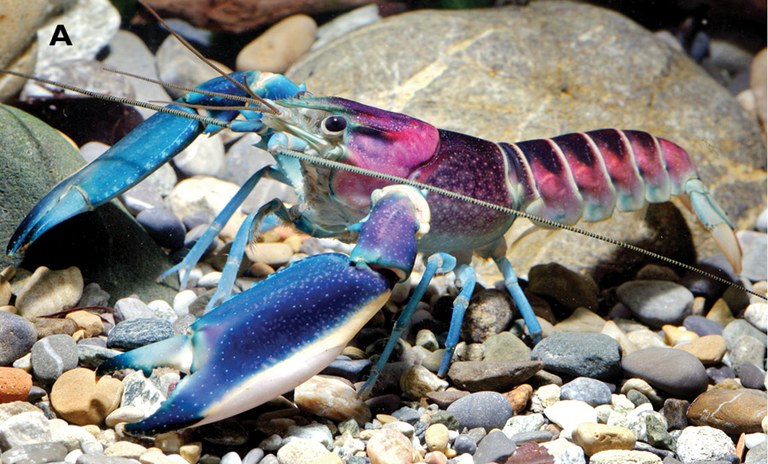 
Pulcher means “beautiful” in latin, which is a most fitting name for this spectacular yabby. Here is a summary of newly described Blue Moon crayfish published in the open-access Zookeys paper:

The crayfishes of the island of New Guinea were extensively studied by Holthuis (1949, 1956, 1958, 1982, 1986, 1996), with recent additions by Lukhaup and Pekny (2006, 2008a) and Lukhaup and Herbert (2008). Nevertheless, over the last decade, there has been an increasing number of colourful crayfish sold in the ornamental fish trade in Europe, North America, and Asia under the names Cherax ”Hoa Creek”, ”Blue Moon”, and “Irian Jaya” presumed to represent a further undescribed species from New Guinea (Lukhaup and Pekny 2008b). The two most common and popular colour forms are: (1) a white, blue and violet morph with blue and white chelae (Fig. 1A–B); and (2) a greenish grey morph with blue and white chelae (Fig. 1C). While they are clearly species of Cherax, a large genus of freshwater crayfish occurring in Indonesia (West Papua), Papua New Guinea and Australia (Ahyong 2014), their exact provenances could not be ascertained, with dealers claiming originated from Sorong (West Papua) and other places in the area that could not be confirmed. In the present contribution, this species is described as new to science and shown to be native to the Teminabuan region of the Kepala Burung (Vogelkop) Peninsula West Papua, Indonesia. The new species, Cherax (Astaconephrops) pulcher sp. n. differs from all other crayfish of this subgenus in the shape of its chelae, shape of body and also in its coloration.