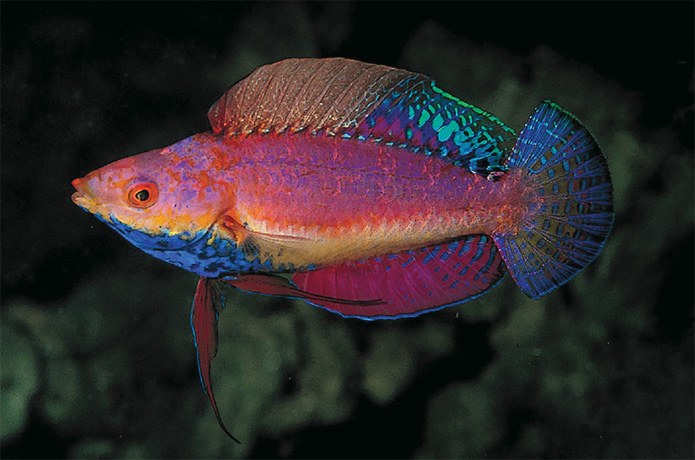 
Cirrhilabrus cyanogularis closely resembles Cirrhilabrus rubripinnis, C. tonozukai, and Palau, and C. filamentosus.  The four species are juxtaposed in the image below.  The most noticeable distinction for C. cyanogularis is that it exhibits a lot more blue pigmentation, which is especially prominent around its throat area, hence its latin name ‘cyanogularis’ (cyano = blue + gularis = throat).  Now that you know this distinction once overlooked, C. cyanogularis is easy to differentiate from the others as a new species.

The new fairy wrasses’ distribution and habitat is described as:

Cirrhilabrus cyanogularis is known from the type locality from Banguingui Island, Sulu Archipelago, Philippines and from an unknown locality in Sulawesi, Indonesia (Figure 8). The species has also been collected regularly for the aquarium trade at Sarangani Island, off the southern tip of Mindanao, Philippines (B. Shutman, pers. comm.). Photographs in the Image Database of Fishes, Kanagawa Prefecturaz Museum of Natural History (KPM) indicate that the species ranges to Sabah, Malaysia (Kapalai Island, KPMNR71060; Mabur Island, KPM-NR71181). The species has also been photographed in Indonesia at Derawan, Eastern Kalimantan, and Bali (Figures 9A, 10A). Like other species in the genus, it favors rubble slopes with little structure, at depths of about 30 m, though has been photographed in as little as 4 m.