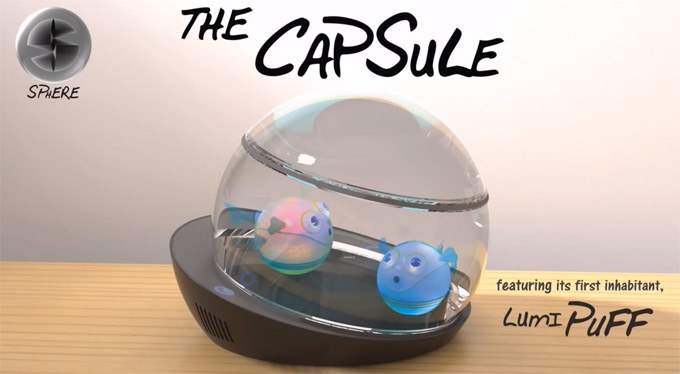 There are already robotic toy fish on the market, but LumiPuff and the Capsule will be the most interactive (and most expensive) electronic pet fish yet.   For $250 USD, you will receive:

Owners can change the color of LumiPuff with a bluetooth enabled device through a mobile app.  LumiPuff can also be tasked to flash lights when your mobile device receives a notification (new message, email, call, etc.).

As an interactive pet, LumiPuff is equipped with a vibration sensor in order to react to any tremors on the Capsule.  Owners can “play” with LumiPuff by tapping the aquarium; this is obviously something we wouldn’t advise with live fish, but it’s still something many people (especially children) do regardless so LumiPuff may be the answer to these over-active fingers.

Furthermore, owners will have to “feed” LumiPuff when it flashes lights to indicate it is hungry.  Owners play refill LumiPuff’s hunger meter similar to Tamagotchi digital pets. As LumiPuff grows more hungry, its light increasingly fades until it finally stops swimming and “dies.”  Unlike real fish though, users can reboot LumiPuff back to health.

The pair is slated to hit the market sometime middle of 2015.

LumiPuff and Capsule are designed by Sphere Corporation based in Hong Kong.  Here is a video showcasing their features.  We warn you the video is a bit unpolished and contains dreaded Engrish.