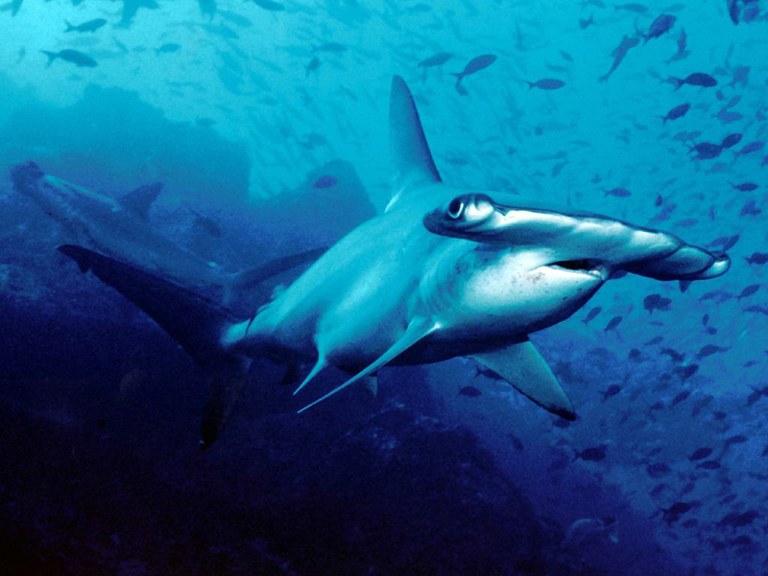 Biologist Joe Quattro led a team that uncovered a new species of scalloped hammerhead shark off the South Carolina coast.


In the journal Zootaxa, they describe a rare shark, the Carolina hammerhead, that had long eluded discovery because it is outwardly indistinguishable from the common scalloped hammerhead. Through its rarity, the new species, Sphyrna gilberti, underscores the fragility of shark diversity in the face of relentless human predation.

South Carolina is a well-known pupping ground for several species of sharks, including the hammerhead. The female hammerhead will birth her young at the ocean-side fringes of the estuary; the pups remain there for a year or so, growing, before moving out to the ocean to complete their life cycle.

In the process of looking at hammerheads, Quattro, his student William Driggers III and their colleagues quickly uncovered an anomaly. The scalloped hammerheads (Sphyrna lewini) that they were collecting had two different genetic signatures, in both the mitochondrial and nuclear genomes. Searching the literature, they found that Carter Gilbert, the renowned curator of the Florida Museum of Natural History from 1961 to 1998, had described an anomalous scalloped hammerhead in 1967 that had 10 fewer vertebrae than S. lewini. It had been caught near Charleston and, because the sample was in the National Museum of Natural History, the team was able to examine it morphologically and suggest that it constituted a cryptic species — that is, one that is physically nearly indistinguishable from the more common species.

After publishing the preliminary genetic evidence for the new, cryptic species in the journal Marine Biology in 2006, Quattro and colleagues followed up by making thorough measurements (of 54 cryptic individuals and 24 S. lewini) to fully describe in Zootaxa the new species, S. gilberti, named in Gilbert’s honor. The difference in vertebrae, 10 fewer in the cryptic species, is the defining morphological difference.

Apart from the satisfaction of discovery, Quattro has established locations and genetic signatures for a number of closely related, yet distinct, species in South Carolina’s rivers, estuaries and coastal waters. The results will go a long way in furthering efforts to accurately define taxonomy and evolutionary history for aquatic life.

His team’s work also demonstrates the rarity of the new species. “Outside of South Carolina, we’ve only seen five tissue samples of the cryptic species,” Quattro said. “And that’s out of three or four hundred specimens.”

Shark populations have greatly diminished over the past few decades. “The biomass of scalloped hammerheads off the coast of the eastern U.S. is less than 10 percent of what it was historically,” Quattro said. “Here, we’re showing that the scalloped hammerheads are actually two things. Since the cryptic species is much rarer than the lewini, God only knows what its population levels have dropped to.”