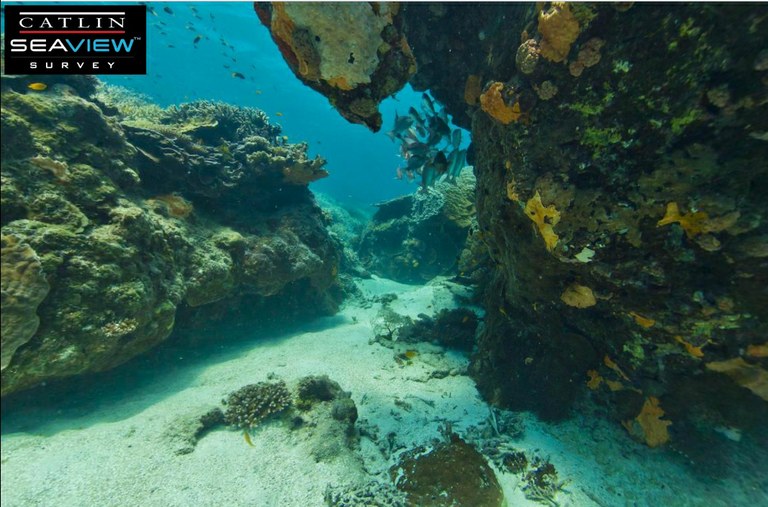 An example of a view from the Catlin Seaview Survey.

The SVII camera used for the survey.

The primary goal of the Catlin Seaview Survey is to scientifically survey the life and ongoing health of the Great Barrier Reef. It will capture images of the Reef’s day-to-day activities in incredible detail from 0-100 meters using the latest in camera and underwater photography technology.

For the project, the group will be using a motorized 360-degree panoramic camera called the SVII which takes geo-located photos every 4-6 seconds as a diver steers it from behind (photo at right). The camera has been named “Sylvia” after the American oceanographer Sylvia Earle. The motorized underwater camera will travel at speeds up to 2.5 mph.

The images taken from this survey will be stitched together and will allow both scientists and the public to virtually dive into the GBR from any internet connected device.  Pick a location and dive while at home, work, or on your daily commute!

Google is working with the group and is planning to incorporate the images from this survey into its product Panoramio, which allows people to explore places through geo-tagged photography. At some future date the 50,000 images generated from this survey might be accessible through Google Maps and Google Earth.

The survey will launch this September and will be comprised of a shallow reef, deep reef, and megafauna survey which when taken as a whole will give a very good baseline of where the GBR is health-wise.  In more detail taken from the project page:

1) The shallow reef survey will involve photographing the reef in full 360 degree panoramic vision on an unprecedented scale using specially developed cameras. These images will be analysed automatically using image recognition software creating an incredibly rich broad scale baseline for scientific analysis from locations along the entire length of the 2300km reef. The visual baseline will be made freely available through Google, for scientists all around the world to study.

2) The deep reef survey looks into the effects of climate change on one of the least known ecosystems on the planet – the deep-water reefs or mesophotic coral ecosystems (between 30-100m). It will provide a comprehensive study of the health composition and biodiversity of the deepwater reefs on the Great Barrier Reef as well as experimentally assess their susceptibility to increased temperature and climate change.

3) The third component of the survey is the mega fauna survey. This is led by Emmy award winning cinematographer and shark researcher Richard Fitzpatrick. We’re going to be tagging and tracking manta rays, turtles and tiger sharks using satellite tags and tracking their movements live in relation to oceanographic data. This is a really important study as there are almost no comprehensive studies that have examined how large animals are changing their distributions in response to rapidly warming seas.

(via The University of Queensland)