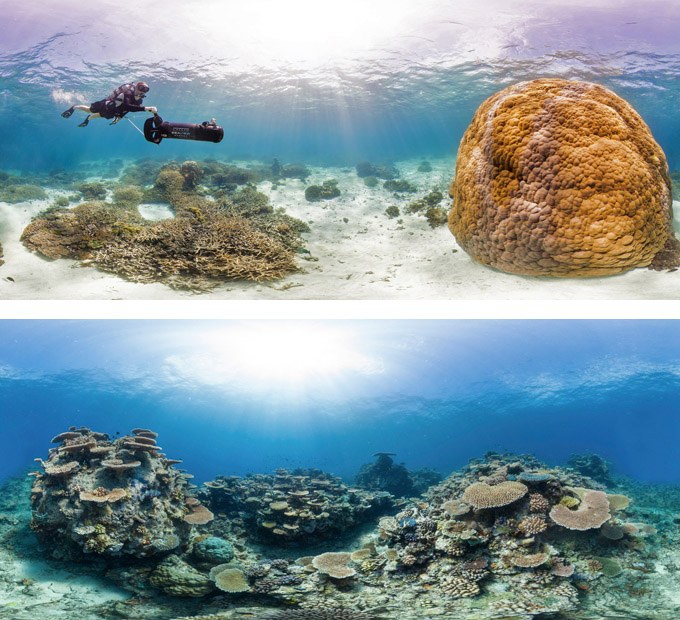 This is just a tiny sampling of what’s in store at the Catlin Global Reef Record, which contains 360 degree images, panoramas, top down views, and videos.   This huge record of coral reefs around the world is primarily intended for scientific and reef management purposes, but who are we kidding?  It’s just as much art.  Nature’s artistry is unparalleled!

These panoramas are available in glorious super high resolution (9500×4200 pixels).  Ladies and gentleman, if you’re willing to sift through a library of hundreds of thousands of HD images, you have your lifetime’s worth of wallpapers.

The Catlin Seaview Survey last year made one of the great wonders of the world – Australia’s Great Barrier Reef – accessible to anyone with an internet connection.

Now the visual access to the reef that has been seen on Google Street View will go even further, with the launch of the Catlin Global Reef Record, a free online resource that will make the survey’s imagery invaluable to scientific researchers.

“The Catlin Global Reef Record is a game-changing analytic tool that scientists and reef managers around the world now have at their fingertips,” said UQ’s Professor Ove Hoegh-Guldberg, who is also chief scientist of the Catlin Seaview Survey.

Visitors to the online library will be able to explore approximately 180,000 panoramic underwater coral reef images with another 200,000 panoramas expected by late 2014.

“Through the Record we will be able to monitor change in marine environments now and in the future,” Professor Hoegh-Guldberg said.

“It will be available to high schools, universities and scientists working on coral research.”

Professor Hoegh-Guldberg, the Director of UQ’s Global Change Institute (GCI), said many countries did not have the resources required to regularly measure the health of their coral reef ecosystems.

“As a result, there is often limited baseline data available for identifying the drivers of change on coral reefs,” he said.

“Without this information, understanding change and implementing coastal management strategies for arresting the downward trend in the condition of coral reefs can be extremely difficult.”

The Catlin Global Reef Record is an initiative of the non-for-profit, Underwater Earth, and developed in collaboration with the GCI, the project’s lead scientific partner.

Professor Hoegh-Guldberg said understanding change to coral reefs is important because almost 25 per cent of marine species live in and around coral reefs and one-eighth of the world’s population expects to draw on marine resources, such as coral reefs, for their livelihood and wellbeing.

He said the images in the Record were scanned for coral species and automatically annotated using computer vision algorithms.

“The footage, meanwhile, is used to create 3D reconstructions of reef ecosystems, providing a visual way to assess reef populations,” he said.

Additional environmental data from satellites, such as ocean temperature, as well as information on regional coral bleaching activity, is included to allow for advanced analysis of worldwide reef health.

The data is captured using a custom-designed underwater camera, which integrates three digital SLR cameras positioned at an angle that allows the Catlin Seaview Survey team to record 360-degree panoramas.

Divers navigate the camera for two-kilometre transects along the reef, capturing high-definition imagery every three seconds.

By the end of 2014, about 300 reef locations will have been recorded, including the Great Barrier Reef, 10 countries in the greater Caribbean region, and the Coral Triangle region.

While many of the stresses on coral reefs originate from local sources, such as fishing activity and pollution, there is now urgent concern over the impact of ocean warming and acidification on coral reefs.

Professor Hoegh-Guldberg said if current trends in greenhouse gas emissions continued, atmospheric CO2 was expected to increase to more than 80 per cent above pre-industrial levels by 2050 – a rate of increase which had few, if any, parallels in the past 50 million years.

The effect of this rapid increase on marine ecosystems, in particular the Great Barrier Reef, would be devastating.

“The magnitude and rate of increases in sea surface temperatures and ocean acidity – both caused by the increasing concentrations of greenhouse gases, including CO2, in the atmosphere – is likely to exceed the ability of many marine species to adapt and survive,” he said.

“The Catlin Global Reef Record is one way we can help turn this around.”

Both the Catlin Global Reef Record and the Catlin Seaview Survey are sponsored by Catlin Group Limited, an international, specialty property/casualty insurer and reinsurer.

Images of the Catlin Global Reef Record can be seen here.

About Professor Ove Hoegh-Guldberg:
Ove Hoegh-Guldberg is the inaugural Director of the UQ Global Change Institute and Professor of Marine Science, at The University of Queensland, Brisbane, Australia as well as being Deputy Director of the ARC Centre of Excellence for Coral Reef Studies. He is the Queensland Smart State Premier’s Fellow (2008-2013), Chief Scientist for the Catlin Seaview Survey and was elected to the Australian Academy of Science this year.