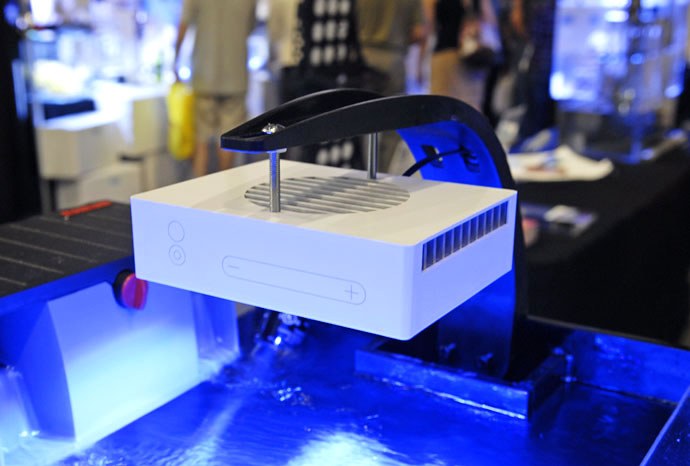 The Aqua Illumination Nano is a very diminutive and bright LED lighting unit with built-in touch controls. Price is $299 including the mounting arm as shown.

Here is Aqua Illumination‘s upcoming (yet unnamed) LED lights in both black and white.  Price is planned at $499.  The new LEDs feature four LED clusters (of five) vs eight LED clusters (of three) of the AI Sol.  The total light output is greater than the Sol thanks to the new Cree XM-L LEDs (same cluster array as the recently introduced Nano).  Wattage is ~75 watts. Furthermore, the new AI features wireless controllability built into the unit.  The upcoming AI is virtually the same width and length of the AI Sol but half the thickness.  As reference, the Sol is pictured above providing light for the photo.

The Aqua Illumination Sol is now available in gloss black, as seen in this photo.  The wireless modules for the Sol are also available in black.  Last month, AI dropped the price of Sols to $399.

Ecotech Marine was not in attendance at RAP 2011, but their new Radions were.  Here, Marine Depot suspends a pair of production model Radions using Ecotech Marine’s Premium Hanging Kit.  The Radions  worked wirelessly with the Ecotech Marine vortech pumps in the tank below.

One more photo of the radion XR30w.  The fit and finish is impeccable, and the unit is much smaller in person then the photos suggest.  They’re comparable to two or three of your favorite magazines stacked together.  Also, I was surprised by both the quietness of its fan as well as how cool the air was blowing out the sides of internal heatsink with the unit running at full intensity.