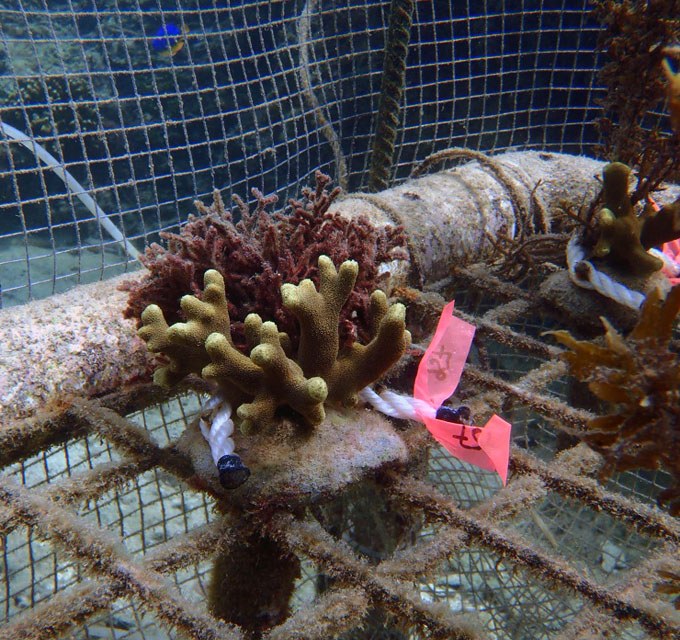 The chemically noxious seaweed Galaxaura filamentosa was placed in contact with a living coral (Porites cylindrica) for eight days to assess whether competition with coral increased its production of toxic anti-coral compounds. (Photo: Douglas Rasher)

Chemical Warfare on Coral Reefs: Suppressing a Competitor Enhances Susceptibility to a Predator

Competition may have a high cost for at least one species of tropical seaweed.

Researchers examining the chemical warfare taking place on Fijian coral reefs have found that one species of seaweed increases its production of noxious anti-coral compounds when placed into contact with reef-building corals. But as it competes chemically with the corals, the seaweed grows more slowly and becomes more attractive to herbivorous fish, which boost their consumption of the skirmishing seaweed by 80 percent.

This appears to be the first demonstration that seaweeds can boost their chemical defenses in response to competition with corals. However, determining whether such responses are common or rare awaits additional studies with a broader range of seaweeds and corals.

The research, sponsored by the National Science Foundation and the National Institutes of Health, was published January 8, 2014, in the journal Proceedings of the Royal Society B.

“The important takeaway is that competition between corals and seaweeds can cause dramatic changes in seaweed physiology, both in terms of their growth and their defense,” said Douglas Rasher, who was a graduate student at the Georgia Institute of Technology when the research was conducted. “These changes have potentially cascading effects throughout the rest of the reef community.”

Rasher, now a postdoctoral research associate at the Darling Marine Center at the University of Maine, conducted the research in collaboration with Mark Hay, a professor in the Georgia Tech School of Biology. Hay and Rasher have used coral reefs as field laboratories, studying the chemical signaling that occurs during coral-seaweed competition, and evaluating how herbivorous fish affect the interactions – and long-term health of reefs.

“We previously found that chemical warfare is fairly common among seaweeds and corals, and that several seaweed species are particularly harmful to corals,” Rasher said. “This research explored the degree to which seaweed allelopathy – chemical warfare – is dynamic, how it changes in response to competition, and also whether competition changes the efficacy of other seaweed defenses used against herbivores.”

The findings may also challenge the popular notion that plants cannot change rapidly and strategically in response to their environments.

“We tend to think of plants as being fixed in their behavior,” said Hay. “In fact, plants such as these seaweeds assess their environment continuously, altering biochemically what they are doing as they compete with the coral. These algae somehow sense what is happening and respond accordingly. They may appear passive, but they are really the tricky chemical assassins of coral reefs.”

For this study, Rasher and Hay selected two seaweed species, one (Galaxaura filamentosa) known for its toxicity to corals, and the other (Sargassum polycystum), which does not chemically damage corals. They fragmented pieces of a common coral, Porites cylindrica, glued them into cement cones and placed them on a rack on a reef located in the shallow ocean off the Fiji Islands. The fragments were allowed to grow in the racks for two years.

At the start of the experiment, the researchers took half of the coral samples and dipped them into bleach to kill the living organisms, leaving only the calcium carbonate skeletons. The skeletons served as the control group for the experiments that followed.

The researchers collected samples from both species of seaweed, and split each sample in two. One half of each sample was assigned to a treatment group, while the other half went to the control group. The treatment group was placed into contact with living corals, while the control group was placed into contact with coral skeletons.

The seaweeds were then allowed to interact with the corals and coral skeletons for eight days. After that, a portion of each sample was removed and chemical compounds extracted from them and embedded into small gel strips that were then adhered to other living corals to assess the toxicity of the compounds. The researchers repeated the experiment, placing entire seaweeds in contact with corals to determine if the plants displayed the same effect.

“We saw that Galaxaura, the chemically rich seaweed and the species we knew was allelopathic, had up-regulated its chemistry to become more potent – nearly twice as damaging – when it was in contact with the living coral, compared to those individuals that had only been in contact with the coral skeletons,” Rasher said.

None of the extracts from the Sargassum damaged the corals.

An experimental coral rack is deployed on a shallow reef within the marine reserve at Totua, Viti Levu, Fiji. The rack was used for research into chemical warfare between seaweeds and corals. (Photo: Hunter Hay)

Until this point, the seaweeds and corals had been protected from herbivorous fishes. The next step was to place seaweed samples – both those that had competed with the living coral and those that hadn’t – onto nylon ropes in a location accessible to fish. The researchers created 15 pairs of these samples and placed them at different reef locations.

“We saw that for the non-allelopathic seaweed, Sargassum, fishes didn’t differentiate – they consumed both the treatment and control seaweeds at equal rates,” Rasher said. “But given the option to choose between treatment and control Galaxaura, fishes consumed 80 percent more of the seaweed portions that had been in contact with a living coral.”

The researchers don’t know all the factors that may have made the chemically noxious seaweed more palatable to the fish. However, those seaweed portions that had been competing with coral had less effective chemical defenses against fish. When the researchers took extracts from treatment seaweed and control seaweed and applied them to a palatable seaweed species not previously used in the experiment, fish preferred the seaweed coated with extracts from the portions that had been competing with corals, indicating that competition had compromised the seaweed’s chemical defenses against herbivores.

For the future, the researchers want to study chemical defenses in other seaweeds to determine if what they’ve seen is common among tropical seaweeds that engage in chemical warfare. For now, they don’t know if the chemical defenses evolved to compete with coral or perhaps for another reason, such as fighting off harmful microbes.

The fact that corals may cause seaweeds to up-regulate their anti-coral defenses could help explain why coral reefs rarely bounce back once they begin a decline and become dominated by seaweeds. The research also demonstrates the importance of studying broad interactions among numerous species within complex communities like coral reefs.

“These kinds of interactions show a mechanism that, once the reef begins to crash, could help maintain that decline,” Hay said. “There may be insights here that we could use to better manage, and hopefully restore, some of these systems. We are also hoping that what we learn may bleed over into other systems.”

This research was supported by the National Science Foundation (NSF) under award (OCE-0929119), by the National Institutes of Health (NIH) under award (U01-TW007401), and by the Teasley Endowment to Georgia Tech. The conclusions or recommendations contained in this news release are those of the authors and do not necessarily represent the official positions of the NSF or NIH.

CITATION: Douglas B. Rasher and Mark E. Hay, “Competition induces allelopathy but suppresses growth and anti-herbivore defense in a chemically rich seaweed,” (Proceedings of the Royal Society B, January 2014).  http://dx.doi.org/10.1098/rspb.2013.2615