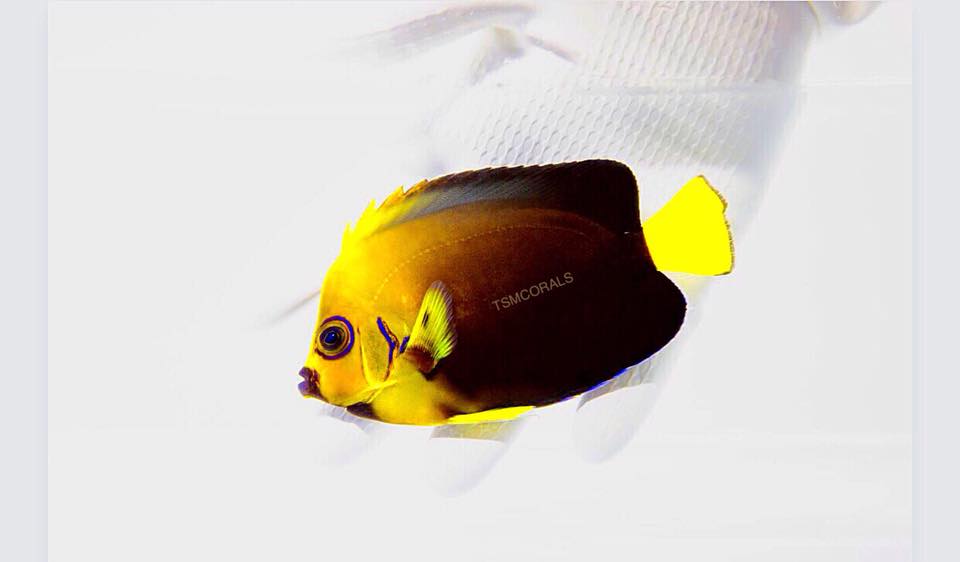 Australia’s reefs are home to a small, but illustrious, collection of endemic pomacanthids. In the warmer waters, we find the spectacular Scribbled Angelfish (Chaetodontoplus duboulayi), along with the Personifer (C. personifer) and False Personifer (C. meredithi). Far less commonly seen are those taxa restricted to the subtropical portions of the Coral Sea. The Conspicuous Angelfish (C. conspicillatus), AKA “the Conspic”, is an iconic species among rare fish collectors, typically selling for several thousands of dollars here in the US; however, it isn’t a true Aussie endemic (most aquarium specimens actually originate from nearby New Caledonia). Rarer still is the Ballina Angelfish (C. ballinae), whose ghostly white visage haunts the mesophotic depths across this region. But there is one other Aussie angelfish that’s even rarer than the Ballina, and, unlike that unobtainable species, this one does occasionally find itself in the aquarium trade.

The “Conspicifer” is a creature which few have ever heard of and fewer still have ever seen in the flesh, with just a handful having ever been collected. The name is a silly, but informative, portmanteau that alludes to the origins of this mysterious fish. This is Australia’s only endemic hybrid pomacanthid, formed from the unholy union of the Conspic and the False Personifer. And a quick glance reveals traces of this unusual parentage in this fish’s striking color pattern. In the rear, what we see is nearly identical to C. meredithi—a black body with yellow pelvic and caudal fins. But in the forebody we encounter something completely different. Present are the distinctive blue “spectacles” that give the C. conspicillatus its scientific name, along with an extensive orange hue that is quite unlike anything else in the genus.

It’s interesting to note that the lips here are blue, as in C. meredithi, so this hybridization isn’t quite so symmetrical. The pectoral fins are also a bit sui generis, being mostly yellow, with a trace of black blemishing the central portion (versus the heavily blackened fins of the parent taxa). In the only other documented specimen, seen in the grainy video below, the pectoral fins shared this appearance, but many other differences can be noted. The caudal fin possessed several irregular black markings (similar to the coloration of the Conspic’s tail), there were additional blue facial markings, and the overall appearance was more in keeping with that of C. meredithi, with a greater extent of black and even a touch of white accenting the nape.

There’s no word on precisely where either of these were collected from, though it’s safe to assume it was somewhere along the Eastern Australian coastline. The range of C. conspicillatus extends as far north as the Capricorn Reefs (and, incidentally, it is identical in its distribution as the true “Barrier Reef” Anemonefish Amphiprion akindynos), while C. meredithi is a mostly tropical species, which strays southward into New South Wales. So was this hybridization the result of a Conspic being at the northern extent of its range? Might this have been from a False Personifer occurring in subtropical climes? Or does this simply happen sporadically all across the areas where these two taxa overlap?

With the recent breeding success of the Bluespicuous Angelfish by Poma Labs, there’s a very real chance that we might someday see the Conspicifer added to the list of aquacultured hybrids. In that example, the second parent was a close relative of C. meredithi, the Bluelined Angelfish (C. septentrionalis) from the Northwest Pacific. There’s still much left to discover about the process of creating these crosses. For instance, what influence does the sex of the parent species have in determining the appearance of their offspring, and are these hybrids fertile with themselves or others? To date, just two specimens of the Bluespicuous have been produced, neither of which was intentional, so expect it to be a while before the repertoire is expanded.

The Conspicifer seen here comes courtesy of New Jersey’s TSM Corals, a relatively new face in the world of high-end aquarium livestock, and it likely represents the first example of this hybrid to ever make it stateside. It’s also arguably the most perfect example of this interspecies cross ever collected from the wild. The Conspic markings are especially pure and clean in this specimen, and the contrast between the orange of the head and the inky black of the body is simply stunning. Superlatives really fail to do justice to the astounding beauty and rarity of this unique fish.