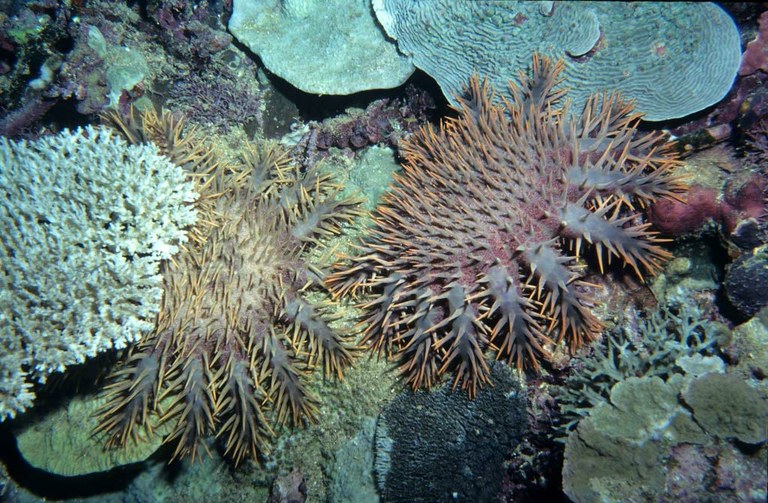 A pair of COTS in Fiji may soon become targets of killer robots. Now there’s a sentence we never thought we’d write. Photo by Derek Keats


Chemicals such as sodium bisulphate and thiosulfate-citrate-bile salts-sucrose agar (TCBS) have proven effective at either directly melting the tissue of COTS or, as is the case of TCBS, causing killer Vibrio spp. bacterial infections to overtake the starfish while not harming other reef life.  But the problem with these forms of population control is that divers first had to find COTS then manually administer the lethal injection to each COTS one at a time.

Now a new automated robot designed to identify and inject COTS may change all that.

From Queensland University of Technology:

New robot has crown-of-thorns starfish in its sights

It’s the robot that has the scourge of the Great Barrier Reef in its sights.

QUT roboticists have developed the world’s first robot designed to seek out and control the Great Barrier Reef’s crown-of-thorns starfish (COTS), which are responsible for an estimated 40 per cent of the reef’s total decline in coral cover.

The COTSbot completed its first sea trials this week in Queensland’s Moreton Bay to test its mechanical parts and navigation system.

Its creator, Dr Matthew Dunbabin from QUT’s Institute for Future Environments, said the COTSbot was equipped with stereoscopic cameras to give it depth perception, five thrusters to maintain stability, GPS and pitch-and-roll sensors and a unique pneumatic injection arm to deliver a fatal dose of bile salts.

“Human divers are doing an incredible job of eradicating this starfish from targeted sites but there just aren’t enough divers to cover all the COTS hotspots across the Great Barrier Reef,” Dr Dunbabin said.

“We see the COTSbot as a first responder for ongoing eradication programs – deployed to eliminate the bulk of COTS in any area, with divers following a few days later to hit the remaining COTS.

“The COTSbot becomes a real force multiplier for the eradication process the more of them you deploy – imagine how much ground the programs could cover with a fleet of 10 or 100 COTSbots at their disposal, robots that can work day and night and in any weather condition.”

The COTSbot is designed to search the reef for up to eight hours at a time, delivering more than 200 lethal shots.

Key to the autonomous underwater vehicle is its new state-of-the-art computer vision and machine learning system.

QUT roboticists have spent the last six months developing and training the robot to recognise COTS among coral, using thousands of still images of the reef and videos taken by COTS-eradicating divers.

Dr Feras Dayoub, who designed the COTS-detecting software, said the robot would continue to learn from its experiences in the field.

“Its computer system is backed by some serious computational power so COTSbot can think for itself in the water,” said Dr Dayoub, from QUT’s Science and Engineering Faculty and Australian Centre for Robotic Vision.

“If the robot is unsure that something is actually a COTS, it takes a photo of the object to be later verified by a human, and that human feedback is incorporated into the robot’s memory bank.

“We’ve now trained the robot using thousands of images of COTS collected on the reef and the system is proving itself incredibly robust at detecting the COTS.

“That in itself is quite an accomplishment given the complexity of underwater environments, which are subject to varying visibility as well as depth-dependent colour changes.”

The roboticists believe COTSbot is the first autonomous underwater vehicle to be equipped with an injection system.

It’s also designed to operate exclusively within a metre of the seafloor, one of the most dynamic and challenging environments for any robot.

Dr Dunbabin first built a vision system for detecting COTS from underwater images ten years ago but shelved the idea of building a robot due to the limitations of the eradication methods in use, which required divers to inject each COTS up to 20 times.

A breakthrough from James Cook University (JCU) last year allowed him to refloat the project.

“I was really pleased to hear about JCU’s announcement last year of a one-shot injection method that had proved just as effective,” Dr Dunbabin said.

“That was the game changer that opened the doors for a robotic solution to the COTS problem. Combining this with new advances in machine learning meant we could make COTSbot a reality.”

The QUT roboticists will take COTSbot to the Great Barrier Reef later this month to trial it on living targets. In that trail, a human will verify each COTS identification the robot makes before the robot is allowed to inject it.

The COTSbot is planned to be working the reef autonomously in December.

The roboticists are seeking to scale up the manufacturing and deployment of the COTSbot, but need funding partners to do so.