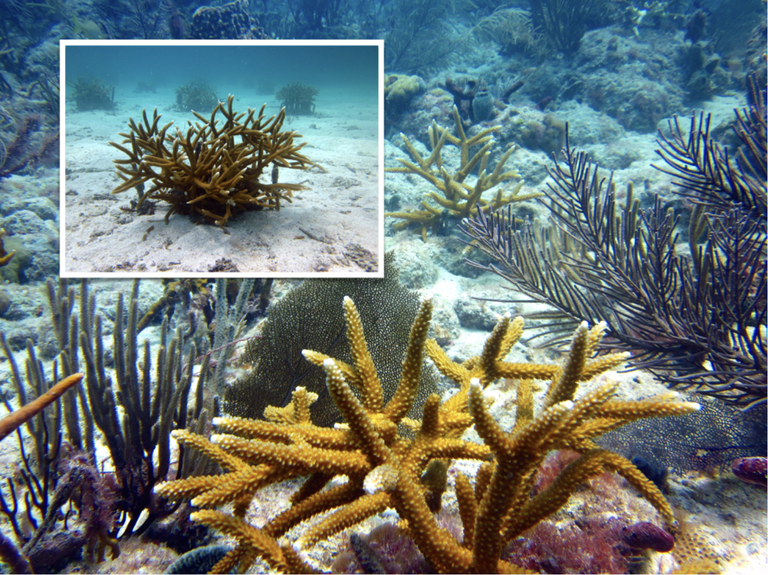 From the University of Miami Rosenstiel School of Marine & Atmospheric Science:

The research, led by scientists at the University of Miami (UM) Rosenstiel School of Marine and Atmospheric Science and partners, has important implications for the long-term survival of coral reefs worldwide, which have been in worldwide decline from multiple stressors such as climate change and ocean pollution.

“Our study showed that current restoration methods are very effective,” said UM Rosenstiel school coral biologist Stephanie Schopmeyer, the lead author of the study. “Healthy coral reefs are essential to our everyday life and successful coral restoration has been proven as a recovery tool for lost coastal resources.”

In the study, the researchers set out to document restoration success during their initial two years at several coral restoration sites in Florida and Puerto Rico. Their findings showed that current restoration methods are not causing excess damage to donor colonies as a result of removing coral tissue to propagate new coral in the lab, and that once outplanted, corals behave just as wild colonies do.

Staghorn coral populations have declined as much as 90% in the Caribbean since the 1980s. As a result, the species was listed as threatened under the U.S. Endangered Species Act in 2006 to help protect and conserve these species that form the foundation of the biologically rich coral reef habitats.

The findings, published in the of the journal Coral Reefs, offers a guide for successful restoration and recovery efforts of the threatened species worldwide.

Thousands of corals are raised in laboratories and planted onto degraded reefs each year. This study is the first to collect baseline coral restoration survival and productivity data at regional scales including data from 1,000s of individual A. cervicornis colonies, more than 120 distinct genotypes within six geographical regions to develop benchmarks to fully assess the progress and impacts of the region’s coral and reef restoration efforts.

Coral reefs provide many goods and services including fisheries habitat, food for humans and other ocean species, and protection against natural hazards such as hurricanes. As a result, coral restoration is viewed as an effective and cost-efficient strategy to buffer coastlines from the effects of storm surge and sea-level rise.

“Coral reefs are declining at an alarming rate and coral restoration programs are now considered an essential component to coral conservation and management plan,” said Diego Lirman, UM Rosenstiel School professor of marine biology and ecology and a coauthor of the study. “Our findings provide the necessary scientific benchmarks to evaluate restoration progress moving forward.”

The public can get involved in restoration through the UM Rescue-a-Reef program, where citizen scientists help plant nursery-grown corals onto depleted reefs alongside scientists.