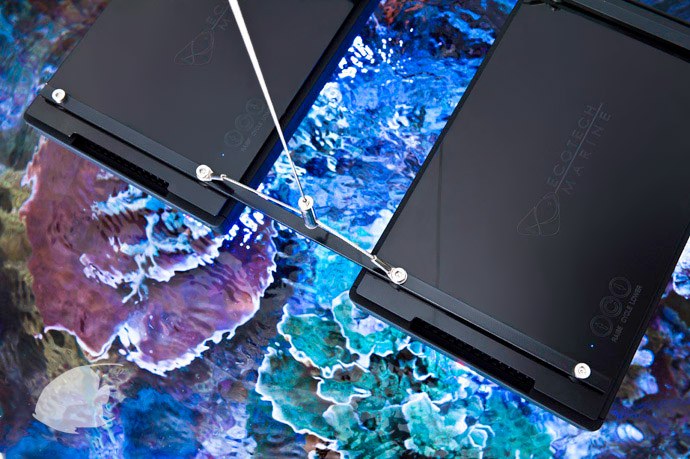 On September 1, 2011, Ecotech Marine formally announced their new XR30w LED Light.  Aside from the press release and general specifications, Ecotech was tight-lipped about their new product.  The info embargo is now over!  Advanced Aquarist is pleased to bring you more information and exclusive photos of this highly anticipated LED lighting system.

Let’s begin by recapping the specifications supplied by Ecotech Marine.

The Fit and Finish

One word summarizes the Ecotech radion XR30w: sleek.  The enclosure is extremely svelte, weighing in at about 3 lbs, only 1.5 inches thick, and about the same length and width of a sheet of plain paper.  The top and bottom are high gloss black, and the sides are painted a rubberized black matte finish.

The top of the XR30w is elegantly minimalistic.  The entire top surface is a continuous raised sheet of high gloss black acrylic with only three thoughtful design elements: a laser-etched Ecotech Marine logo in the center, a three-button interface with a single indicator LED, and four “grommeted” M5x0.8 mounting screw holes on the corners.

The bottom of the radion hosts a pair of circular LED clusters (more on this later) and a centrally mounted cooling fan.  The fan blows air in and out the sides of the enclosure, cooling the big internal heat sinks along the way.  The fan is extremely quiet and inaudible in any real world application.  And because of the way the airflow system is designed, users can mount their XR30w units directly to the top of canopies, although I suspect few aquarists will choose this mounting option because it covers the beautiful laser-etching and impedes access to the control panel.  All the internal electronics are isolated to prevent damage from moisture/humidity.  A 10 foot detachable power cable is supplied.

Review samples were shipped with chrome fan grills and screws.  As such, all the photos you will see from this weekend will show the review sample version.  The final production units will feature black metal grills and black screws to match the rest of the fixture (see below).

There is no doubt the radion XR30w is a purpose-built lighting system.

The XR30w features a pair of parabolic reflectors with a “peanut-shaped” interior contour.  The reflectors are protected by replaceable acrylic lenses.  Each reflector houses 17 LED bulbs each with individual 135 degree reflectors.  While many manufacturers choose to use more narrow optics (e.g. 75 degree), Ecotech designed each bulb for wide dispersion, presumably to avoid the “disco-ball”/banding effect that can plague multi-colored arrays.  The large parabolic reflectors help to focus the total light output over the intended coverage area.  As a result, the Radions can be mounted closer to the water surface (if desired) compared to other LED lights.  In essence, the XR30w employs a two staged reflector system to mix the different spectra LEDs into one “coherent” output over a wide and uniform area.

Each parabolic array houses the following LEDs (as a reminder: there are two arrays per unit):

The first thing you may notice is the inclusion of red and green LEDs.  Some people will question the necessity for LEDs in these spectra, but Ecotech set out to create a LED array that can reproduce just about any spectral output aquarists desire, and this is only possible with a RGB (red/green/blue) array.  For instance, popular metal halides such as Radiums actually have significant peaks in red.  As such, LED systems that only employ white and blue LEDs have a hard (often impossible) time replicating the spectragraph of popular halides.  The Ecotech XR30w, on the other hand, is capable of being fine-tuned to reproduce a broad range of outputs.

Green light has little photosynthetic value (chlorophylls do not use green light efficiently).  Ecotech included this spectrum for RGB adjustability and believes that a “full spectrum” output provides a more pleasing light to the human eye then an array comprised of only blue and white LEDs.

The updated XR30w spectrograph at 100% output

The red LEDs are more controversial because science has determined red light actually regulates zooxanthellae density in corals, and too much red light can induce coral bleaching (read Dana Riddle’s Advanced Aquarist article).  However, Ecotech assures Advanced Aquarist the maximum red output of the Radion is comparable to the red output of Radium metal halides.  And without red LEDs, there is simply no way to replicate the spectral output of Radiums or many other popular metal halides.

The other specification that may catch the tech-savvy reader’s eye is the 5 watt output of the Cree XP-G Cool White LEDs.  Most manufacturers operate this bulb at 3 watts, but Ecotech has chosen to drive this bulb at 5 watts because it can sustain this output within its operating tolerances and thus not suffer any reliability or longevity issues.  The tradeoff for more light output is there is a reduction in efficiency when the XP-G Cool White LEDs are driven at 5 watts.

We will leave the light output measurements for a future expert magazine article, but suffice it to say, the radion XR30w is one bright light.  When compared to the AquaIllumination Sol, the radion sports more LEDs (even if you do not count the red and green).  And in regards to the color temperature: The radion is fully customizable, so there is no single fixed Kelvin rating like conventional lights.  Currently, Ecotech rates their radion as 6,000-20,000K based on the preset colors, but we are sure the unit can reproduce a broader range of color temperatures with custom settings.

The XR30w employs a six-channel-capable driver (it currently uses five channels – one for each LED color).  Combined with the modular hardware design of the radion platform, the multi-channel driver will allow for a great deal of adaptability and future-proofing.  For example, if Ecotech issues a new LED cluster with just three LED colors, the driver can easily adapt to control the new array, even controlling each of the two LED clusters separately using three channels per cluster.  This means you can control one half of the XR30w separately from the other half.

The radion XR30w tentatively features the following modes of operation (all subject to change upon release):

For any of these modes, users can opt in or out of supplemental features such as storm and cloud cover simulation, vortech sync, moon light simulation, etc.  Programming is performed on your personal computer connected via a USB cable.  Ecotech Marine will provide the downloadable software free of charge.

In custom mode, settings can be exported for archiving or sharing with others.  What this ultimately means is radion owners can import other people’s settings for their own unit.  Imagine the exciting possibility for a database of settings – a veritable radion “app store.”  Say you stumble upon a successful Radion-lit tank you’d like to emulate; Simply download the settings for your own tank.  Are you looking to replicate the output of AquaConnect 14,000K metal halides?  Download the setting.  In fact, Ecotech has plans to facilitate this type of community sharing.

The high gloss black top of the radion XR30w.  Visible are the impressive laser-etched logo, capacitive touch buttons, and side vent (along with the edge of the internal heatsinks).

The radion utilizes a three-button capacitive touch control and LED indicator light located on the top of the unit.  Users can adjust light levels via this interface as well as toggle between settings via pressing/swiping button combinations.

The radion XR30w features wireless communication.  A XR30w is able to communicate with other Radions and with VorTech pumps to synchronize operation.  Once you program one radion, it can then disseminate instructions to other Ecotech devices within range to work together as an integrated system. What’s more, the radion can work wirelessly with Neptune Apex and GHL controllers outfitted with wireless modules.  The real-world wireless range of Radions is the same as the EcoSmart system found on VorTech pumps (about 100 feet).

Another innovative feature of the radion is the built-in battery backup support.  The XR30w can connect to Ecotech Marine’s battery backup and operate in energy-saving mode during a power interruption.  Power loss can lead to the livestock loss when aquariums are depleted of oxygen.  We all know the role circulation plays in this phenomenon, so we take precautions to supply backup power to our pumps.  However, light also plays a role.  When lights are shut off, corals and algae start to consume oxygen (through respiration) rather than produce oxygen (through photosynthesis).  Thus, supplying backup power to lights can also help stave off oxygen deprivation in the event of power interruption.

The radion XR30w will be supplied with a basic hang-mount hardware (users must supply their own cables).  Ecotech will also offer an optional premium hang-mount kit that includes stainless steel adjustable cables.  There is currently no plans for a tank-mounted option, but Advanced Aquarist hopes Ecotech will consider this option in the future.  If not, we have no doubt many aftermarket kits will hit the market.

Please note this information is subject to change.  Ecotech has finalized the hardware for production, but the software is ever-evolving to take advantage of the many capabilities the radion XR30w is capable of.

Due to the optics/reflector design, users have the option of mounting the XR30w close to the water’s surface.