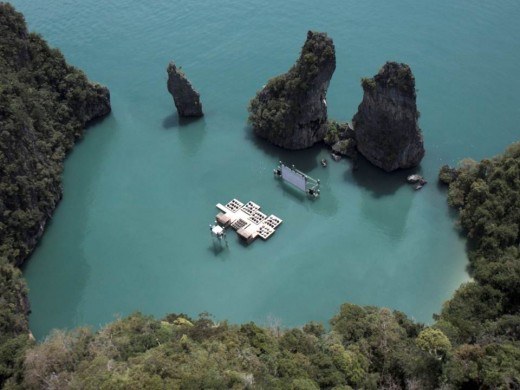 If you like movies, coral reefs, and art, you’re going to love this.  German architect Ole Scheeren designed and installed a truly awe-inspiring functional art: a movie theater floating in the turquoise lagoon of Nai Pi Lae Lagoon on Kudu Island, Thailand.

The thought of watching films here seemed surprising: A screen, nestled somewhere between the rocks. And the audience… floating. Hovering above the sea, somewhere in the middle of this incredible space of the lagoon, focused on the moving images across the water. A landscape of pieces playfully joined together. A sense of temporality, randomness. Almost like drift wood. Or maybe something more architectural. Modular pieces, loosely assembled, like a group of little islands. A congregation of rafts as an auditorium. Archipelago Cinema.

The project was designed for Film on the Rocks Yao Noi Foundation.  Alas, only a few lucky moviegoers had the opportunity to watch a film on the floating cinema; Archipelago Cinema was dismantled (as the architect had envisioned) shortly after its debut and donated to the Yao Noi village.

We eagerly await its rebirth!