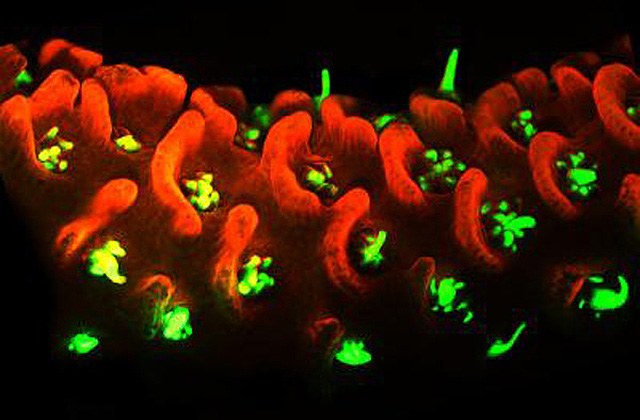 
From the University of Southampton

Scientists from the University of Southampton have discovered the genetic basis which allows corals to produce their stunning range of colours.

They have found that instead of using a single gene to control pigment production, corals use multiple copies of the same gene. Depending on how many genes are active, the corals will become more or less colourful.

Dr Jörg Wiedenmann, Professor of Biological Oceanography and Head of the University’s Coral Reef Laboratory, says: “It was one of the longstanding mysteries of coral reef biology – why sometimes individuals of the same coral species can show such dramatic differences in their colour, despite sitting side-by-side on the reef and being exposed to the same environmental conditions. The key finding is that these so-called ‘colour morphs’ do not use just one single gene to control the pigment production, but multiple identical copies thereof.”

The research, which is published in Molecular Ecology, also explained how this strategy could help corals to survive in stressful environments.

Using the staghorn coral Acropora millepora as a model, the team found that the fluorescent pigments that are mostly responsible for coral colours act as sunscreens for the symbiotic algae that live in the coral tissue. These alga require light to produce sugars, which they can contribute to the nutrition of the corals in return for the shelter and the supply of nutrients that are provided by the coral host.

However, the light intensities on coral reefs can, on occasions, exceed the levels that are healthy for the alga and the light becomes dangerous for the symbiotic partnership. This light stress can ultimately contribute to the loss of the symbiotic algae, a process known as coral bleaching. If the partnership cannot be re-established, the corals often die.

Dr Wiedenmann explains: “Corals are firmly attached to the substrate, so they can’t just move in the shade when they receive too much sunlight. Instead, they need to boost their capacity to cope with too much sun during these times. We show that increased light levels switch the genes on that are responsible for the production of the colourful sunscreening pigments. This is why corals are usually more colourful in the most light exposed colony parts.”

However, the enhanced protection comes at a cost and the corals need to allocate substantial energy reserves to accumulate the high amounts of protein pigments that are characteristically found in brightly coloured corals. This energy might be divided away from other important processes, potentially resulting in reduced growth rates or lower numbers of offspring. Therefore, being brightly colour might not be a good investment for corals settling in less light exposed parts of the reefs.

Dr Wiedenmann says: “The genetic framework provided by gene copy number variation ensures that some individuals within a coral population can protect themselves very well, these are likely to survive better in stressful environments. Others are less protected, but can invest their energy in processes that could help them to succeed in habitats with less light stress. The resulting colour polymorphism increases the potential of the coral species to extend their distribution range along the steep light gradients of coral reefs and to inhabit more ecological niches.

“Our finding suggests that the repertoire of reef corals’ stress responses is larger than previously thought.”

The open-access paper can be read at Molecular Ecology.

The genomic framework that enables corals to adjust to unfavourable conditions is crucial for coral reef survival in a rapidly changing climate. We have explored the striking intraspecific variability in the expression of coral pigments from the green fluorescent protein (GFP) family to elucidate the genomic basis for the plasticity of stress responses among reef corals. We show that multicopy genes can greatly increase the dynamic range over which corals can modulate transcript levels in response to the light environment. Using the red fluorescent protein amilFP597 in the coral Acropora millepora as a model, we demonstrate that its expression increases with light intensity, but both the minimal and maximal gene transcript levels vary markedly among colour morphs. The pigment concentration in the tissue of different morphs is strongly correlated with the number of gene copies with a particular promoter type. These findings indicate that colour polymorphism in reef corals can be caused by the environmentally regulated expression of multicopy genes. High-level expression of amilFP597 is correlated with reduced photodamage of zooxanthellae under acute light stress, supporting a photoprotective function of this pigment. The cluster of light-regulated pigment genes can enable corals to invest either in expensive high-level pigmentation, offering benefits under light stress, or to rely on low tissue pigment concentrations and use the conserved resources for other purposes, which is preferable in less light-exposed environments. The genomic framework described here allows corals to pursue different strategies to succeed in habitats with highly variable light stress levels. In summary, our results suggest that the intraspecific plasticity of reef corals’ stress responses is larger than previously thought.