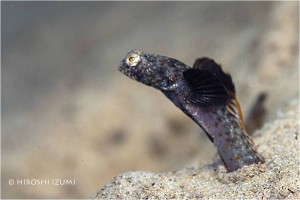 The oceans are full of interesting shallow water fishes, but all too often the ichthyological diversity collected for aquarists is limited to only those species which appear on tropical coral reefs. It’s a shame that collectors don’t venture into other habitats with more regularity, for outside the reefs there’s a wealth of unique and desirable aquarium species.

In the shallow waters off the coasts of Australia and Japan is a flamboyant little fish called the ginpohaze. It can be found in sandy and silty areas, where it resides in small vertical burrows which it digs into the sediment. The use of vertical burrows in these featureless habitats is seen in several unrelated groups, such as the bandfishes (Acanthocepola) and garden eels (Gorgasia&Heteroconger)—an interesting example of ecological and morphological convergence. The burrows serve as a refuge from predators in an otherwise barren and vulnerable landscape, while at the same time providing an anchor point from which to feed on passing zooplankton. The various goby genera thought to be most closely related to ginpohaze also utilize burrows, either dug by themselves or by a pistol shrimp symbiont, but never are these burrows dug vertically as in the ginpohaze. 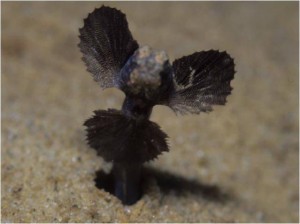 The maximum size of the fish is reported to be a diminutive 4cm, and, given its elongate body, this is a particularly slender fish. Behaviorally, the ginpohaze stands apart from most other gobies thanks to its prominent, colorful pectoral fins that are waved in an alluring display to attract mates. Males have the remarkable ability to alter the intensity of their coloration, from the normal pale, speckled appearance (which camouflages against their sandy environs) to a nearly black forebody. The video below (and another here) shows the intensification of the coloration in the buildup to a display, which appears to take a period of time before the final coloration is reached. This is presumably from the contraction and relaxation of melanophores, similar to the color change seen in cephalopods.

[youtube https://www.youtube.com/watch?v=RIQehh71pGc&w=640&h=390]P.saltator courtship display. Note the intensification of the coloration prior to its dance. Video by LEGMA.

The name ginpohaze, or ginpo haze, refers to its vague resemblance to the “ginpo”, a species of Japanese tidepool gunnel (Pholisnebulosa) used to create fish sauce. [This species has a long eel-like (=anguilliform) body, like the ginpohaze’s.] The word “haze” translates as “goby” in Japan. Thus the ginpohaze is a gunnel-like goby, etymologically speaking.

The three species of ginpohaze are placed in the genus Parkraemeria. P. ornatais the type species of the genus, described from a specimen taken at a lagoon outside of Sydney Australia in 1946. It is endemic to Australia, despite reports confusing it with the Japanese species. P. rhinoceros was described in 2013 from specimens collected from Nago Bay in Okinawa. This species differs from its congeners by possessing a small extension to the upper lip. The third species, P. saltator, was also described in 2013 from specimens collected near the mouth of a river in the Yaeyama Islands of Japan. The name “saltator” come from the Latin for “dancer” and alludes to the courtship display.