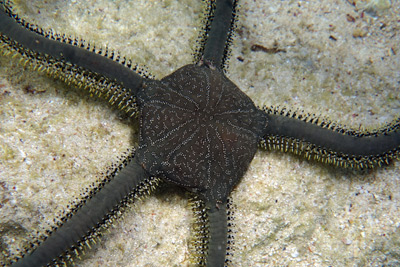 Green brittle star (Ophiarachna incrassata)“Voracious predator” is not a term one commonly associates with brittle stars—that is, of course, unless the brittle star in question happens to be Ophiarachna incrassata, or the green brittle star (aka “the green death”). This bold species has a well-earned reputation for not merely scavenging deceased small fish and motile invertebrates, as one might assume, but also for actively hunting and capturing these animals while they’re still alive and kicking. Physical appearanceO. incrassata, as its common name implies, is muted green overall with lighter colored dots forming a radial pattern on the central disc. Whitish to yellowish spines line either side of each arm. Specimens can reach a rather prodigious size of around 20 inches in diameter (arm tip to arm tip, that is). Feeding This brittle star is not a finicky eater. It will accept pretty much any foods offered to fish as well as consume detritus MORE