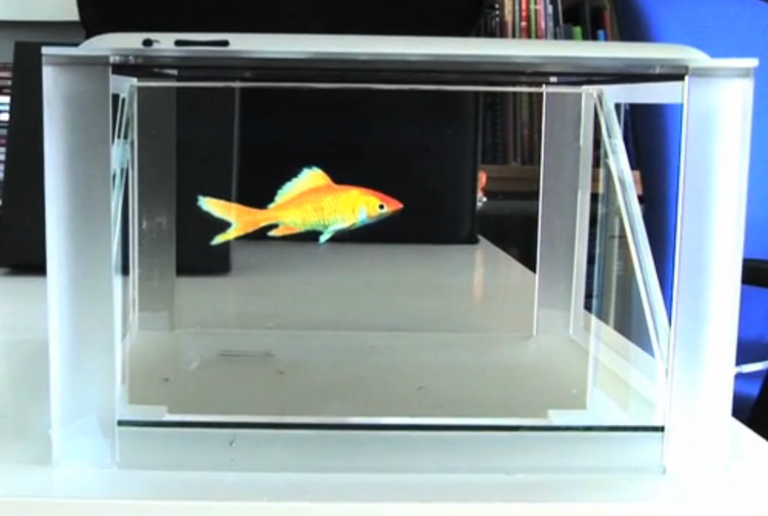 i-Lusio: take any image from your tablet, place it in the real world and let it interact with surrounding objects.


Do you remember the scene in Star Wars IV: A New Hope where Princess Leia’s holographic image is projected into thin air by R2D2?  Well, someone has come up with a way you can do that too, with a box-like enclosure and a tablet computer.

It’s called the i-Lusio and it’s a new campaign on Indiegogo (very similar to Kickstarter) by inventor Feddow Claassen.  The i-Lusio allows you to take an animated image from your tablet and “place it in the real world and let it interact with surrounding objects.”

The i-Lusio consists of two parts: a tablet app for displaying a stationary or animated image and a reflection box that reflects the image from the tablet to the viewer using a piece of glass tilted at a 45-degree angle.  The user loads their image into the app and places it face down on the i-Lusio box.  The image is then reflected to the user inside the box.

The i-Lusio can be used for all sorts of applications ranging from displaying 3-dimensional models to having a virtual holographic aquarium.  One other neat thing possible with the i-Lusio is physical objects can be placed behind the reflection glass, which makes the animated image look like it is interacting with its environment. If we think about reef aquariums, one could place rock and fake coral pieces behind the glass and viola!, instant virtual reef tank with no maintenance worries.

The project is modestly priced at $44 for initial backers, with increasing backing tiers for those that want more.