The Impact of Sunscreen on Hard Corals and Their Symbiotic Algae

Hawaii has made national headlines as the first state to ban the sale of sunscreens containing either oxybenzone or octinoxate. Scientists at the Polytechnic University of the Marche, Ancona, Italy studied the chemicals, and found that “Sunscreens cause the rapid and complete bleaching of hard corals, even at extremely low concentrations. The effect of sunscreens is due to organic ultraviolet filters, which are able to induce the lytic viral cycle in symbiotic zooxanthellae with latent infections.” The lytic cycle is one of the two cycles of viral reproduction. 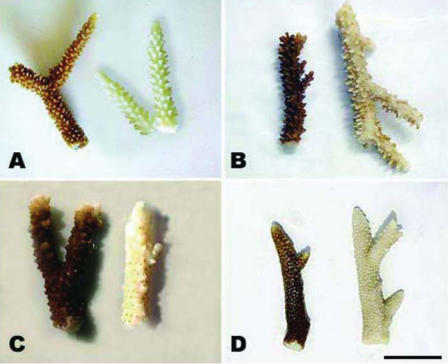 Roberto Danovaro and a team of biochemists, marine scientists, and chemical scientists conducted the study, “Sunscreens Cause Coral Bleaching by Promoting Viral Infections”, and published the results with Environmental Health Perspectives, here

“To evaluate the potential impact of sun-screen ingredients on hard corals and their symbiotic algae, we conducted several independent in situ studies with the addition of different concentrations of sunscreens to different species of Acropora (one of the most common hard-coral genus), Stylophora pistillata, and Millepora complanata. These studies were performed from 2003 to 2007… in four coral reef areas: Siladen, Celebes Sea (Indonesia); Akumal, Caribbean Sea (Mexico); Phuket, Andaman Sea (Thailand), and Ras Mohammed, Red Sea (Egypt).
Nubbins of Acropora spp. (~ 3–6 cm) were collected, washed with virus-free seawater filtered onto 0.02-μm membranes, immersed in polyethylene Whirl-pack bags filled with 2 L virus-free seawater, and incubated in situ. Replicate sets containing nubbins from different colonies (more than 300 polyps each) were supplemented with aliquots of sunscreens (at final quantities of 10, 33, 50, and 100 μL/L seawater) and compared with untreated systems (used as controls).
At the end of the experiments, samples of coral tissue were fixed in 3% glutaraldehyde and stored at 4°C for zooxanthellae counts and transmission electron microscopy (TEM).
Water samples for viral counts were processed. After the addition of sunscreens, viral abundance in seawater surrounding coral branches increased significantly, reaching values greater by a factor of 15 than in controls.
TEM analysis of sun-screen-treated corals showed the presence of virus-like particles (VLPs) around and inside the zooxanthellae. The VLPs were round-hycosahedral in shape and 50–130 nm in size. No viruses were encountered either inside or outside the zooxanthellae in control samples. All these results indicate that sun-screens caused coral bleaching by inducing the lytic cycle in symbiotic zooxanthellae with latent viral infections.
In all replicates and at all sampling sites, sunscreen addition even in very low quantities (i.e., 10 μL/L) resulted in the release of large amounts of coral mucous (composed of zooxanthellae and coral tissue) within 18–48 hr, and complete bleaching of hard corals within 96 hr. Untreated nubbins used as controls did not show any change during the entire duration of the experiments.
Sunscreens cause the rapid and complete bleaching of hard corals, even at extremely low concentrations. The effect of sunscreens is due to organic ultraviolet filters, which are able to induce the lytic viral cycle in symbiotic zooxanthellae with latent infections.”