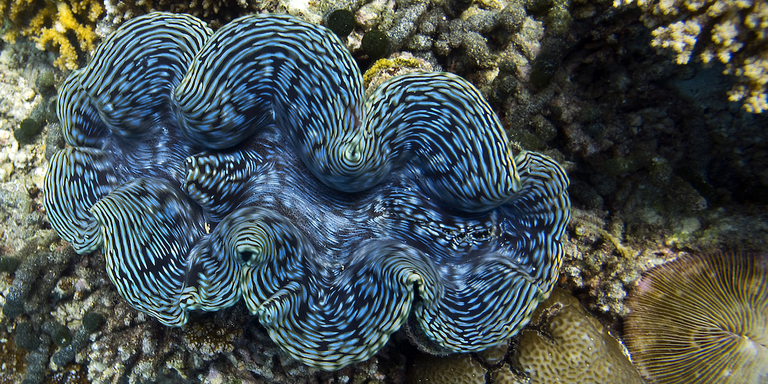 Penn researchers are collaborating to study how giant clams convert sunlight into energy, which could lead to more efficient production of biofuel. Photo credit: Malcolm Browne


To learn more about the iridophores – what they are and how they benefit Tridacna clams – read this excellent article by Dana Riddle.

From the University of Pennsylvania:

Mimicking giant clams to enhance the production of biofuel

Alison Sweeney of the University of Pennsylvania has been studying giant clams since she was a postdoctoral fellow at the University of California, Santa Barbara. These large mollusks, which anchor themselves to coral reefs in the tropical waters of the Indian and Pacific oceans, can grow to up to three-feet long and weigh hundreds of pounds. But their size isn’t the only thing that makes them unique.

Anyone who has ever gone snorkeling in Australia or the western tropical Pacific Ocean, Sweeney says, may have noticed that the surfaces of giant clams are iridescent, appearing to sparkle before the naked eye. The lustrous cells on the surface of the clam scatter bright sunlight, which typically runs the risk of causing fatal damage to the cell, but the clams efficiently convert the sunlight into fuel. Using what they learn from these giant clams, the researchers hope to improve the process of producing biofuel.

Sweeney, an assistant professor of physics in the Penn School of Arts and Sciences, and her collaborator Shu Yang, a professor of materials science and engineering in the School of Engineering and Applied Science, refer to the clams as “solar transformers” because they are capable of absorbing bright sunlight at a very high rate and scattering it over a large surface area. When the light is distributed evenly among the thick layer of algae living inside the clam, the algae quickly converts the light into energy.

“What those sparkly cells are doing,” Sweeney says, “is causing light to propagate very deeply into the clam tissue and spread out.”

After coming across Sweeney’s work, Yang struck up a collaboration to see if they could mimic the system by abstracting the principles of the clam’s process to create a material that works similarly. She and Ph.D. student Hye-Na Kim devised a method of synthesizing nanoparticles and adding them to an emulsion — a mixture of water, oil, and soapy molecules called surfactants — to form microbeads mimicking the iridocytes, the cells in giant clams responsible for solar transforming. Their paper has been accepted to Advanced Materials.

Sweeney compared the process to making a salad vinaigrette. The more a person shakes it, the smaller the oil droplets in the dressing. If one were to take nanoparticles, add them to the oil-water emulsion and shake it at the right speed, the droplet size can be controlled. After doing an optical characterization of the beads, the researchers found that they function very similarly to the clam cells.

Irodycites, the “sparkly” cells on the surface of clams, cause light to propagate very deeply into the clam tissue and spread out. When the light is distributed evenly among the thick layer of algae living inside the clam, the algae quickly converts the light into energy.

“It’s very efficient, and it’s very difficult to achieve,” Yang says. “People are trying to do this by designing nanoparticles, but you need to do a lot of synthesis and find ways to precisely control their size, shape and optical properties, which becomes complicated and expensive. Our method is both simple and inexpensive and at the same time achieves better results than all these other systems.”

The researchers’ next step is to try to mimic the organization of the algae within the clams by getting algae to grow in gel pillars. Once they figure out how to do so, they hope to then marry their artificial iridocytes and the algae and measure the system to see if it can produce fuel to the same high efficiencies as the giant clam.

If successful, the method can be used for photosynthesis to enhance the efficiency of biofuel production. It can also be used in solar panels for generating, storing or preventing heat to allow for better temperature control in buildings.