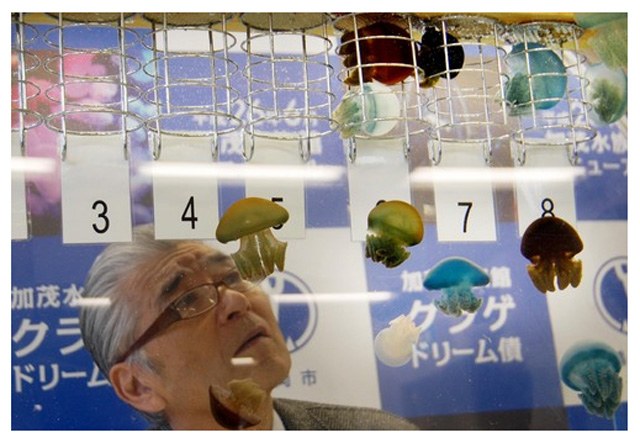 
On March 17, 2014, 25 jellyfish were released into a tank with sixteen numbered baskets lining the top and bottom of a narrow one meter long aquarium.  The first two jellyfish that entered baskets picked the lucky bond winners.  Keep in mind the winners didn’t win bonds but simply the right to purchase bonds.  A subsequent (conventional) lottery was held on March 20 to determine the remaining winners.

The “jellyfish lottery” was clearly a promotional stunt, and it clearly worked.  The city raised 3.5 billion yen (approximately $34 million USD) for the aquarium through the sale of its municipal bonds, which had a 0.266% higher interest rate compared to Japanese five-year-government bonds.  4,030 people and 34 companies applied to purchase the bonds.  What a remarkable turnout and successful fundraising for a public aquarium!

The remodeled Kamo Aquarium is scheduled to open in June, 2014.