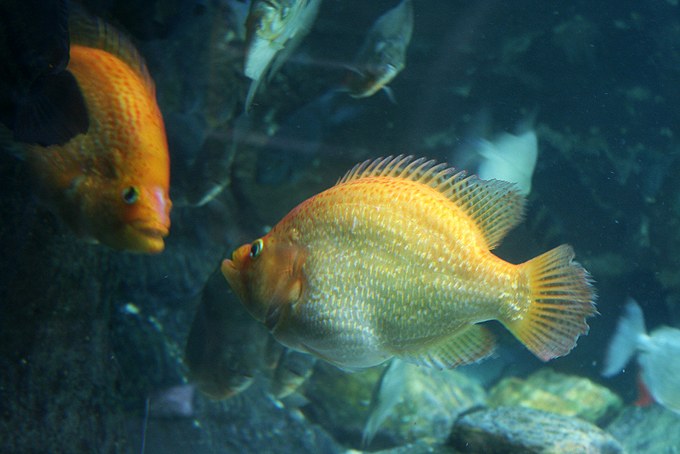 Mirror, mirror: What is this fish thinking when it sees itself? Photo by Quinn Dombrowski (c.c.)


Scientists regularly use mirrors in fish behavior studies in order to understand how fish might behave against rivals.  Aquarists have also been known to place mirrors by their fish tanks trying to distract the attention of an aggressive fish who is bullying another (often times newly-introduced) fish.

But the mirror trick might not work as well as we’d like to think according to a new study published in the scientific journal Animal Behaviour.

Fish aren’t that superficial … or maybe they are

More and more studies have shown that fish are smarter and more complex than many people, including scientists, give them credit for.

The researchers found that a mirror image is not sufficient to elicit a natural aggressive response because fish (at least the convict cichilds they studied) are not merely lashing out at anything that looks like them.  A fish’s aggression is also significantly based on the behavior and reaction of the other fish in context of complex social hierarchy, and mirror images simply do not react like real rivals would.  Initially, a fish might “attack” its mirror image thinking it’s a rival, but when the mirror image “responds” in an unexpectly unnatural way, the fish is able to recognize something is wrong about the mirror image and thus does not treat it like a true competitor.

The authors of the paper go one step further.  They theorize that a fish’s posturing when seeing their own reflection might ultimately be a form of vanity, which implies a degree of self-awareness.  When fishes flash and flare at their own reflection, they may just be admiring themselves!  When you see your betta or cichlid or fairy wrasse showboating back and forth along the glass, you might be witnessing a spectacular form of fishy narcissism.

The researchers conclude that “Mirrors do not reflect reality and they should not be used in behaviour studies.”  The big problem is many fish behavior research were based on this technique, so their conclusions are now reopen to new scrutiny.

This isn’t the first study to find that mirror images evoke unnatural responses in fish.  A study in 2010 compared fishes’ brain activities when fishes were confronted with mirror images versus live rivals.  While both stimuli elicited reactions that appear like aggression, the effect on their brain activity was dramatically different.  The findings suggest that fish are cognitively able to discern a real rival with that of an mirror image.  The differences in measured brain activity could be the result of the difference between aggression and vanity.

When it comes to the mirror trick for aquariums, this technique may still work.  However, it might not work for the reason why used to think.  Fish who respond to their mirror image might not be attacking it but rather showing off to themselves.  This would mean that the mirror trick only works for vain fish.

Fish in aquariums often see their own reflection at least during parts of the day.  That’s because the combination of reflective surface (glass or acrylic) and varying lighting angles can produce many reflections within a tank.

We wonder what fish think when they see their mirror image.  Some fish don’t seem to pay any attention to reflections.  Some fish initially show interest, fear, or aggression towards their own reflection when first introduced into an aquarium but their interest fades over time.  Some posture against their mirror image every day (often times during the same time of the day).

Do our fish learn their reflections are not threats?  Do they develop self-awareness of their mirror image?  Are some of our fish showing off to themselves (which would suggest some fish are more vain than others)?  Are some fish more gullible than others and believe they are seeing an actual rival?  Do they just think their doppelganger is a crazy fish?

All we know for sure is different species behave differently, and even fish within species have distinct personalities, which means there is unlikely only one correct answer.