The most amazing and ridiculous copepod you have never seen 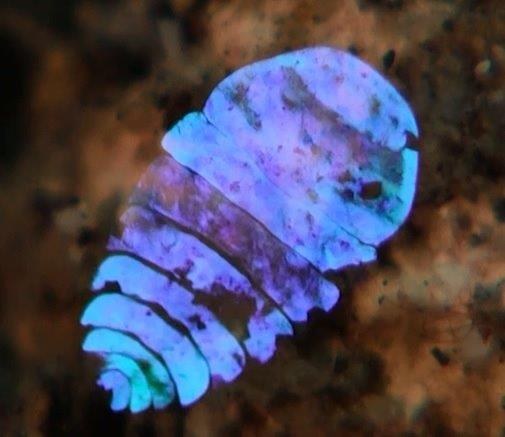 
From the American Chemical Society:

The secret to the sea sapphire’s colors — and invisibility

Sapphirina, or sea sapphire, has been called “the most beautiful animal you’ve never seen,” and it could be one of the most magical. Some of the tiny, little-known copepods appear to flash in and out of brilliantly colored blue, violet or red existence. Now scientists are figuring out the trick to their hues and their invisibility. The findings appear in the Journal of the American Chemical Society and could inspire the next generation of optical technologies.

Copepods are tiny aquatic crustaceans that live in both fresh and salt water. Some males of the ocean-dwelling Sapphirina genus display striking, iridescent colors that scientists think play a role in communication and mate recognition. The shimmering animals’ colors result when light bounces off of the thin, hexagonal crystal plates that cover their backs. These plates also help them vanish, if only fleetingly. Scientists didn’t know specifically what factors contributed to creating different shades. Scientists at the Weizmann Institute and the Interuniversity Institute for Marine Sciences in Eilat wanted to investigate the matter.

The researchers measured the light reflectance — which determines color — of live Sapphirina males and the spacing between crystal layers. They found that changes of reflectance depended on the thickness of the spacing. And for at least one particular species, when light hits an animal at a 45-degree angle, reflectance shifts out of the visible light range and into the ultraviolet, and it practically disappears. Their results could help inform the design of artificial photonic crystal structures, which have many potential uses in reflective coatings, optical mirrors and optical displays.