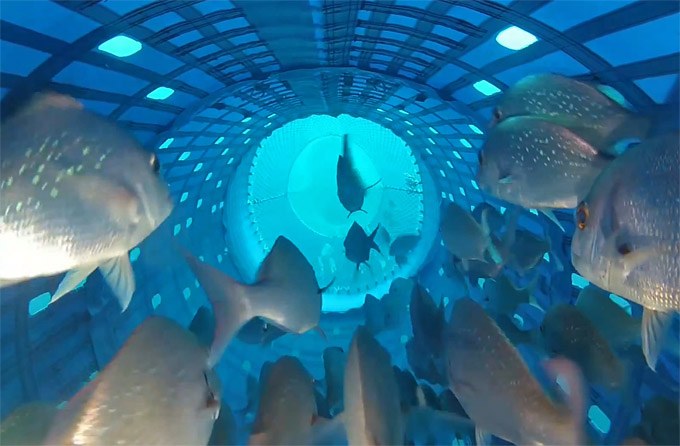 A view from inside a PSH tubular fish net


Trawling is one of the most common ways to catch fish on a commercial scale.  Trawling involves one or more boats dragging a massive net through the water, indiscriminately catching whatever is in its path.  While this method nets a lot of fish, it is highly destructive because it snags everything without differentiation.  Endangered sea turtles, juvenile/undersized fish, marine mammals, and sharks regularly end up in trawl nets.

Enter the Precision Seafood Harvesting technology.  After contributions of $52 million by three of New Zealand’s biggest seafood companies and the NZ government, scientists have developed this more eco-friendly way to catch fish en masse.  Instead of drag nets, the PSH technology uses large diameter PVC tubular nets with perforations to allow smaller/juvenile fish to escape.  And unlike drag nets, the entire tube is brought up the surface with its livestock swimming and alive.  Fisherman then sort its content and return any bycatch back to the ocean uninjured.

Even doubting fisherman have been pleasantly surprised at how many fish these tubular nets are able to harvest according to various reports.  What’s even more startling to them is the health of the fish that come up.  Obviously, fish brought up free-swimming are going to be drastically healthier than fish dragged through the ocean stacked up with other fish in the net.  The difference should mean higher quality catches, not to mention a more dignified, humane way to bring fish to market.

We realize this has nothing to do with aquarium fish (perhaps this technology could be downsized for aquarium fish collection).  Nonetheless, this type of technological advancement to aid our ailing oceans should interest any Advanced Aquarist reader.