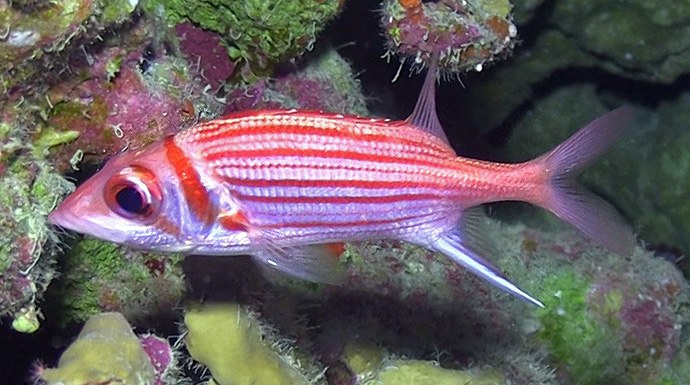 
The abstract of the open-access Pensoft paper introduces Neoniphon pencei:

Neoniphon pencei, n. sp., is described from thirteen specimens, 132-197 mm standard length (SL) collected from mesophotic coral ecosystems (MCEs) at Rarotonga, Cook Islands by divers using mixed-gas closed-circuit rebreathers. It differs from all other species of the genus in number of lateral line scales, scales above and below lateral line, elements of life color, and in COI and cytochrome b DNA sequences. Of the five other known species of Neoniphon, it is most similar to the Indo-Pacific N. aurolineatus and the western Atlantic N. marianus both morphologically and genetically.

Squirrelfish (Holocentridae) are ubiquitous on reefs around the world, but they’re under-represented in captivity.  This might be because squirrelfish are relatively larger schooling fish (upwards of 6 inches), which require more room to exhibit their social behavior than, say, smaller chromis or anthias.  They’re also a bit more cryptic than most reef fish.  Otherwise, squirrelfish are hardy, peaceful additions to any larger reef tank.  A school of them in a 300 gallon would have impressive visual impact.  Note: squirrelfish can do fine alone in captivity, but they seem more comfortable in groups.

The N.pencei holotype photographed below is credited to Richard Pyle and Brian Greene, both of whom will be speaking at MACNA 2015 in Washington, DC (not-so-subtle hint to attend).