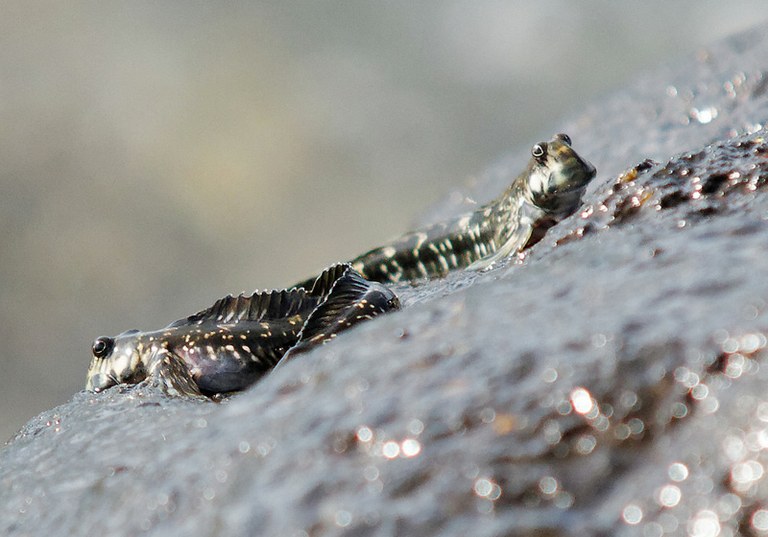 Just two blennies sunbathing. These fish like being out of their element. Photo by Patti (C.C.)


Below is a video of the Pacific leaping blenny (Alticus arnoldorum) in its natural habitat.  These reef blennies can spend up to twenty minutes of water.  Notice how they graze algae off the rocks while hopping around out of the water.  Super cool!

And here is neat lab footage of the Pacific leaping blenny doing what it was named for.  They use their tail as springs to launch themselves great distances.

So why do blennies leave the water?  Researchers investigate:

Leap onto land saves fish from being eaten

From the University of New South Wales

Fish on the South Pacific island of Rarotonga have evolved the ability to survive out of water and leap about on the rocky shoreline because this helps them escape predators in the ocean, a ground-breaking new study shows.

“Avoiding predators might be an explanation of why some animals move from their ancestral homes into starkly different environments, but evidence for this is rare because it is difficult to collect,” says study first author Dr Terry Ord of UNSW Sydney.

“Our study of blennies on Rarotonga is the first to examine the pressures driving fish out of the water. There obviously have to be some major benefits for fish to make the dramatic shift onto land. Otherwise, why would they do it?

“It turns out the aquatic environment is a nasty place for blennies, full of enemies wanting to eat these small fish. But life is less hostile on the rocks, with birds their main worry,” he says.

The study, by scientists at UNSW and the Australian National University, is published in The American Naturalist.

Rarotonga in the Cook Islands provides an extraordinary opportunity to study fish evolution in action because four species of blennies have independently emerged from the water to spend various amounts of time times on land.

The researchers observed the behaviour of three of these amphibious species, which divide their time between the water, the rock shelf in the intertidal zone, and the exposed land above the high tide mark.

“At low tide most of the blennies were on the rock shelf in the intertidal zone. Those remaining in the water actively avoided areas where there were predators, such as flounders, trevallies, wrasses and moray eels,” says Dr Ord.

“As the tide came in and the rock shelf became submerged, most of the blennies moved to higher ground, above the high tide mark, apparently to avoid being eaten by the aquatic predators coming in with the rising water.”

The team also created 250 replica blennies out of plasticine, and placed them in the water and on land above the high tide mark.

“There were far more attacks on the model fish from predators in the ocean than predators on the shore, showing there are obvious benefits for blennies in becoming fish out of water and colonising the land,” says Dr Ord.

Other reasons fish might move onto land could be to find new sources of food, to escape competition for resources, or to escape adverse fluctuations in water conditions.