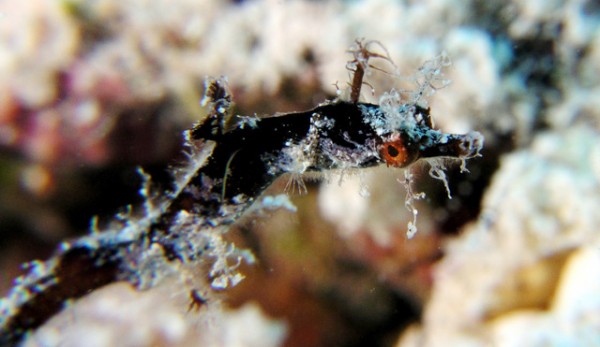 Close up of a pygmy pipehorse – Cozumel, Mexico. Photo Courtesy of Jim Lyle Diving in Cozumel, is by all accounts, is an amazing experience. Cozumel is considered one of the best diving locations in the world, with reefs and shallow coral formations teaming with sea life. Divers flock from around the world to see such amazing animals as sharks, sea turtles, stingrays, and of course, seahorses. But one surprising animal exists there going mostly unnoticed. It’s the West Atlantic Pygmy Pipehorse, Amphelikturus dendriticus, a diminutive relative of seahorses. Most people know what a seahorse is, and many have some awareness of pipefish, the seahorse’s straightened, snake-like cousin, but few are aware of the in-between fish called the pygmy pipehorse. They are, as you would expect, a middle ground between seahorses and pipefish. They hitch like seahorses, and while they have a slightly bent neck, its no where to the extreme that gives seahorses their moniker. Females tend to rest. . . More: The Pygmy Pipehorses of Cozumel