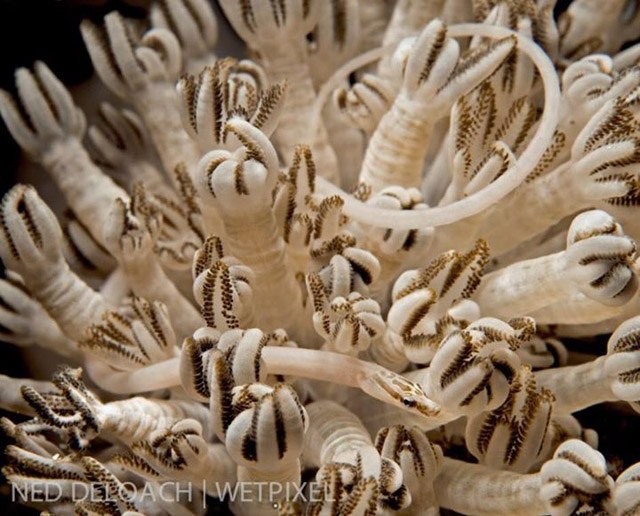 What an amazing shot! There’s a itty bitty pipefish snuggled in this xenia coral.


Before we continue, we want to first give Ned and Anna a proper shout-out.  Ned, alongside Paul Humann, have coauthored many reef animal identification books that a lot of reefkeepers have no doubt read.  They’ve also contributed immensely to science, including helping discover many new species of sealife during their countless dives.  Ned and Anna Deloach share their passion online via the underwater photography website WetPixel as well as their own blog, blennywatcher.com, a blog Advanced Aquarist proudly calls our friend.

To learn more about this dynamic duo, read this terrific interview by Alert Diver, a website that Ned and Anna also often contribute to.  The world really could use more people like them.

Another xenia coral hosting yet another perfectly camouflaged animal: a tiny shrimp.  See it? (left of center)

A glass blenny (Emblemariopsis diaphanus) peeks out from behind a cluster of red fan worms.  It’s like a cabaret show.

Fish (such as Sergeant Major damselfish) lay A LOT of eggs for a reason.  This poor lil’ guy is about to become crab food.  This is one of those one-in-a-million photographs!

As we just said, bubblebee shrimps are awesome. ‘Nuf said.

A baby flying fish in the palm of a hand! It’s like a gold flake.

This is only one crab: a commensal “Acro” crab (this guy is actually in a Stylophora sp.) in the process of molting.  Now how often do you see crabs molting, no less an acro crab?

This is another sargussum citizen … carrying a full load of eggs.