The State of Coral Mariculture 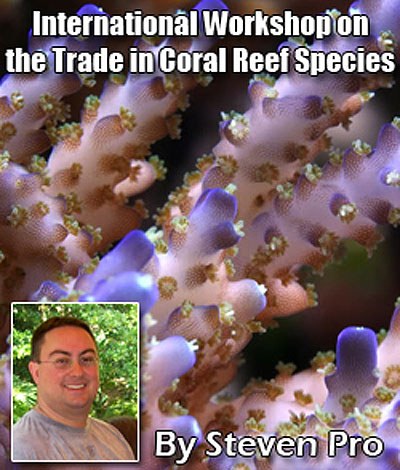 I recently had the pleasure of attending the International Workshop on the Trade in Coral Reef Species: Development of International Guidelines for Environmentally Friendly Stony Coral Mariculture. This workshop was conducted in beautiful Bali Indonesia. The National Oceanic and Atmospheric Administration organized it in conjunction with a non-profit organization called The Ocean Foundation.

In attendance were representatives from the US government, non-profit organizations, US ornamental industry, and academia. The host country was also very well represented as most members of AKKII were there (Asosiasi Koral Kerang dan Ikan hias Indonesia, also known as the Indonesian Coral, Shell, and Ornamental Fish Association). In addition, representatives from Papua-New Guinea, the Philippines, Sri Lanka, Timor Leste, and Malaysia came along with two importers from Canada and a gentleman from the UK/European Union who deals with CITES regulations there. It was quite an impressive gathering to say the least and I learned a great deal during my time there.

The purpose of this workshop was to work together towards developing a best practices manual for coral mariculture. While much was covered during the week there, for now I am going to limit my discussion to the country reports as I feel they would be the most interesting to my fellow hobbyists and the most telling for the near future of the industry.

Read the rest of his article at Reef2Reef to learn more about the mariculture programs in PNG, Philippines, Sri Lanka, Timor Leste, Malaysia, and Indonesia.