The Striated Frogfish: a Great Choice for the Oddball Fish Aficionado 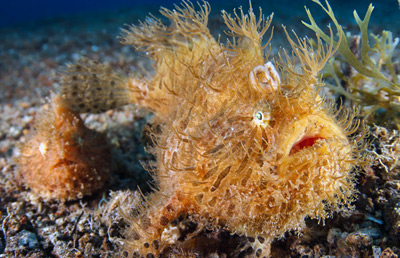 Striated, or hairy, frogfish (Antennarius striatus)Marine aquarists who are drawn to cryptic species with unusual morphology rather than bright colors might want to give the striated frogfish (Antennarius striatus) a second look. Actually, depending on the system it’s kept in, it may be necessary to give it a second (or third or fourth) look, as this angler is truly a master of camouflage. Physical traitsLike most antennariids, A. striatus is somewhat monstrous—albeit fascinating—in appearance, having a globular body that is cleverly obscured with myriad protrusions and frilly appendages. Its modified pectoral fins look almost like little legs, which is pretty cool (but also kind of creepy). Striated frogfish commonly exhibit brown and tan tiger striping, but they can modify their coloration to blend in with different surroundings. The maximum recorded size for this species is between 8 and 9 inches, though most specimens aren’t apt to get quite that large MORE