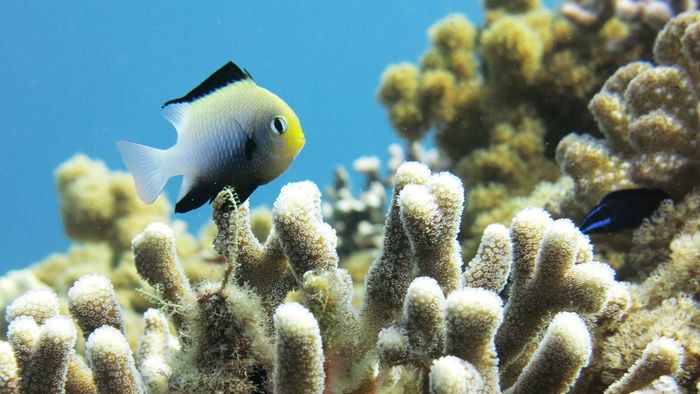 
Coral reefs are very complex communities with lots of organisms interacting with one another for mutual benefit (and often survival) – a relationship called symbiosis.  Everyone knows about the symbiosis between clownfish and anemone.  Reefkeepers understand that most corals can not survive without zooxanthllae and vice versa.

The relationship between damselfish and SPS corals is also well-documented.  Many damsels use branching corals as shelter and nest; in exchange for providing a home, the coral gets a defender and housekeeper plus nutrients from the fish waste.

But a new study in the Journal of Experimental Biology finds that the symbiosis goes much deeper than our previous superficial understanding.

For the first time, researchers measured an impressive increase in photosynthesis in the SPS coral, Stylophora pistillata, when the damselfish, Dascyllus marginatus, were present.  The increase is attributed to increased water movement around the coral branches caused by the damselfish’s movement.  The “ventilation by a single fish can increase photosynthesis by about 22%” when damselfish were swimming within the Stylophora’s branches.  This new finding comes on the heels of recent Advanced Aquarist articles by Dr. Tim Wijgerde and Dana Riddle that show how water movement aids photosynthesis in corals.

Of course, a damselfish doesn’t spend all its time living inside corals; the researchers calculate damselfish account for a 3-6% increase in photosynthesis throughout an entire day, which still represents a significant benefit to corals.

A breath of fresh (salt) water

This study demonstrates that coral reefs are intricately intertwined in ways we have yet to fully appreciate.