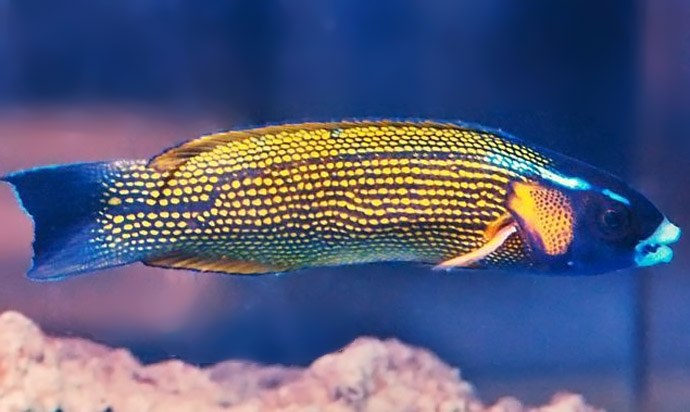 
Pacific East Aquaculture has listed a single 3-inch (max size) specimen for $3,000 USD, the first time we’ve ever seen this species offered for sale.  Two specimens were collected in Polynesia; one was donated to Long Island Aquarium (New York).  Labropsis polynesica is a species with limited geographic distribution within the Eastern Central Pacific, consequently never having found its way into our hobby (again, to the best of knowledge).

Pacific East Aquaculture states that the specimen for sale is eating prepared foods (including pellets and a “wide variety of frozen foods”).  However, prospective buyers should be aware that Labropsis wrasses are generally corallivores who, like Harlequin Filefish, naturally consume SPS polyps.  The genus also has a poor track record in captivity.  No specific information about the diet and behavior of L.polynesica is available because it’s such a rare fish, but we would anticipate that this is not a “reef safe” species like its congenors – at least not anymore so than Harlequin Filefish, which a few reefkeepers have successfully kept in fully stocked reef aquariums. In any event, L.polynesica should be regarded as an “expert only” fish.