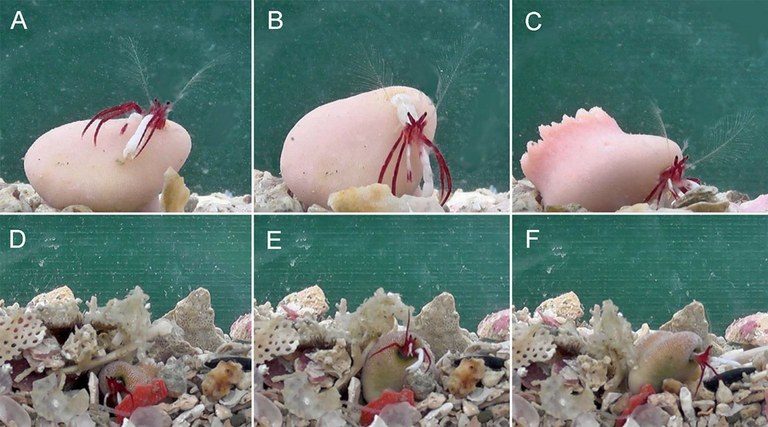 A new hermit crab species can live in a walking coral’s cavity in a reciprocal relationship, replacing the usual marine worm partner, according to a study published September 20, 2017 in the open-access journal PLOS ONE by Momoko Igawa and Makoto Kato from Kyoto University, Japan.

In marine ecosystems, certain ‘walking’ corals act in partnership with marine worms known as sipunculans. The worm shelters in the coral’s cavity and receives protection from predators, in return providing transportation and preventing the coral being buried in sea floor sediment. These two organisms have evolved a specialized codependence, and in such relationships, it is usually impossible to replace either partner with a different species.

Hermit crabs are best known for scavenging seashells left by marine creatures such as snails to protect their soft abdomens. However, when the authors of the present study surveyed walking corals in the Amami Islands of southern Japan, they identified a new species of hermit crab that adopts the walking coral as its home instead of a seashell. The researchers raised specimens in aquaria and found that the hermit crab appears to replace the worm in the usual sipunculan-coral partnership: just like the worm, the crab transports the walking coral and can prevent the coral being buried by using its legs to brush away sediment. Living coral offers the hermit crab an advantage over seashells: it grows alongside the crab, so it never outgrows it.

The new hermit crab, named Diogenes heteropsammicola to reflect its relationship with the Heteropsammia coral genus, is red and white and has atypically slender legs and claws. While most hermit crabs have an asymmetrical tail segment which fits the usually right-handed coil of their seashell homes, D. heteropsammia’s symmetrical tail may better adapt it to walking corals, whose cavities may coil either way. It is the only known hermit crab species to partner with a living coral. and the authors speculate that the crab may have become a secondary partner for the coral after the sipunculan-coral reciprocity had already evolved.