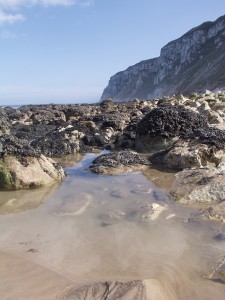 I’m always amused by hobbyists getting worried about their corals sitting out of the water for a few minutes during a water change, or keeping them submerged for every second during a move between tanks. Obviously what some people in the hobby don’t know is, many of the corals we keep are adapted to being out of the water for a period of time during low tide. It would also seem that the more sensitive corals and inverts such as SPS and clams would be least likely to survive, but that’s wrong again. SPS and clams are some of the shallowest living of reef animals and are thus exposed to air most often. This is so common in the wild that we can’t really claim to be reproducing natural conditions without getting corals in the air once in awhile.  A tank I found online inspired me to do some experimenting outside the box myself, and I’ve had some good results as well as some interesting disasters.

This tank goes far beyond my experiments to date with computer controlled tidal fluctuations that are matched to the real tidal cycle, but it is still the perfect example to put some new ideas in everyones head. This tank should remind us all to keep breaking the mold and crossing the borders, because that’s how amazing displays are built.