There’s Hope! Perhaps I Can Make an Eight-Armed Friend, After All. 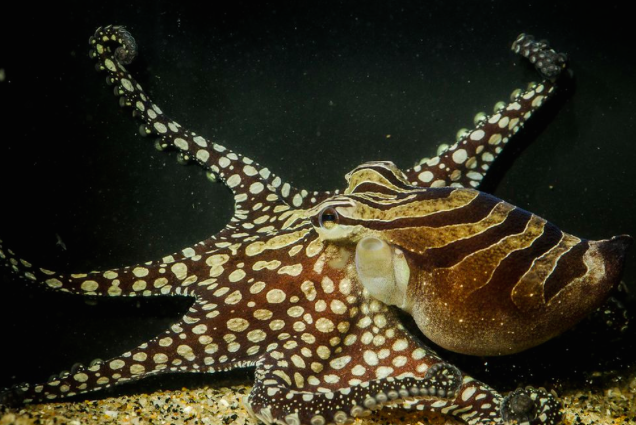 Oh, boo. Looks like it’s an interspecies thing. National Geographic is featuring this thought-provoking story that questions everything we think we know about the Octopus. My true idol in life, is known to be beautiful, cunning, adaptable, deadly and damn good at yoga. They are NOT, however, known to be very social creatures. The lone “floppy-floppy spiders of the sea” (thanks, Ze Frank) tend to keep to themselves, to the point where they make a name for themselves blending in with their surroundings as not to be bothered. On top of that, when spotted and approached, they typically put on an impressive color-changing display in a very “don’t mess with me” sort of manner. Admittedly, I do the same on occasion. Well, turns out new studies say the Octopus isn’t just a giant, grouchy jerk who lives in a garbage can (or mish-mosh of misplaced shells). Back in 1991, Aradio Rodaniche, a Panamanian Biologist, reported finding the Pacific Striped Octopus hanging out and partying in groups of up to 40, basically having giant orgies off the coast of Nicaragua. Clutches of eggs everywhere. 20 years later, Richard Ross came across the social species and acquired a few to further study their strange behavior.

“Ross is one of the few scientists who are studying and observing some of this octopus’s truly bizarre—and sometimes anxiety-provoking—behavior, which he and his team will describe in an upcoming publication.

“Regular octopus mating, where the male is behind and on top of the [female]—or far away—that’s scary enough to watch,” said Ross. Females of many species, for instance, will sometimes kill and eat their mate, even if they are mating from a distance.

But “watching these guys come and interact with their beaks—wrapped up in a ball of limbs—are they fighting or mating?” he recalled wondering.”

So many questions! Another reminder of how little we really know about the creatures of the Deep. Not long before these guys start taking to Twitter. I encourage you to make your way over to the rest of the article, really an excellent read!