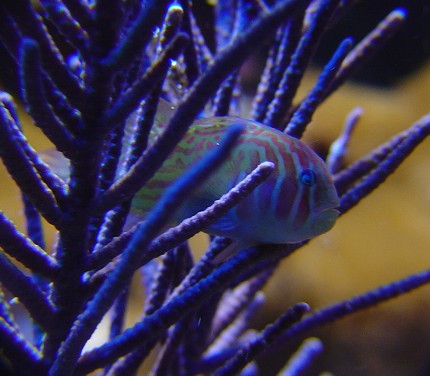 We are after all very distant relatives of fish (if you believe Darwin) so we should have some sort of understanding of the way they feel.  Unfortunately, we don’t.

We don’t see the way fish see, we don’t feel the way fish feel, and we also don’t eat the way fish eat.  Humans, as air breathing animals living on a flat surface, only have to be concerned about going forward, backward and from side to side.  Fish on the other hand add up and down.  That “up and down” movement not only comes into play while swimming around aimlessly but also hunting and being hunted.  At a moment’s notice a fish must determine which way to go to evade a predator.  It has many choices and its tiny brain determines this effortlessly.

Fish also can “feel” things from a distance.  Some call this “remote feel” or “remote senses”.  All real fish have a thin line starting from their head and running down their sides to their taisl.  This “lateral line” is directly connected to a fish’s brain and allows the fish to “feel” objects all around and even behind it.  That’s why it is difficult to catch a fish with a net, even with the lights out.  Most fish can feel the “echo” of water pressure bouncing off an object similar to how sonar works and many fish can sense the electric field created by the muscles of other animals.  Sharks are experts at this and hammer head shark, with the large sensory organ across their wide head are the masters.

Many of the fish we commonly keep can dive into a coral head without getting a scratch and some fish can hunt in complete darkness.  If a fish loses an eye, it barely notices this would-be disability and gets on with its life like nothing happened.

Fish also do not bang into the glass of our tanks even though from their perspective they cannot see it, as they are looking straight through it as we are from the outside.  Even in pitch darkness they will not hit the glass.  This sense in fish is much more important than sight.

Food for our fish is a major concern for us as aquarists and we strive to give our animals the best diet humanly possible, but fish are not human.  Far from it.

Being cold blooded creatures their digestive systems are vastly different than ours.  Due to our elevated body temperature we can eat almost anything; fish cannot.  Our temperature allows us to eat and process solid fat like that we would get from red meats.  Fish cannot. Solid fat would just be passed through a fish’s stomach because its body temperature is too low to allow the fat to be liquefied or utilized.  Fish need oil which is a liquid at a fish’s temperature.  The larger pelagic sharks can deal with solid fats as they can maintain some heat in their bodies, allowing them to eat mammals (and aquarists).

All species of fish are different and all fish evolved different types of internal organs along with varying digestive systems.  A seahorse for instance does not even possess a true stomach and must eat  small amounts of food throughout the day.  I would imagine the stomach of a mandarin would be similar as that fish can not eat a large meal at one sitting or even swallow it if it wanted to.

Also, we as humans can go to a supermarket and buy all the foods that we hope will keep us healthy; captive fish have to make do with what we give them.  If we study what they eat in the sea, we will know what to give them in our tanks.  A fish such as a lionfish eats almost nothing but whole fish and that is what it should be fed-not squid tentacles, shrimp tails or scallop muscles but whole fish: guts, heads, bones and all.  It uses all of the internal organs of its prey, including the bones, from which it extracts calcium.  The foods I just mentioned are severely lacking in oils and calcium.  Fish such as tangs constantly graze algae and along with the algae they accidentally pick up pods, worms, crabs and anything else tiny enough to fit in their mouths. Still, their main food is algae and that is what they should be fed– not lettuce or spinach but algae.  Some salt water algae have calcium in their tissues to stiffen them and that is where tangs get their calcium. Lettuce and other terrestrial plants would be lacking in this important nutrient in sufficient amounts.

I once had a cusk eel.  It looks something like a cross between a freshwater lungfish and knifefish but it is bright yellow.  I kept that fish for eighteen years and never saw it except at night with the help of a flashlight.  I also never fed it but it was fat and healthy.

One night while I was spying on him I saw him hunting for amphipods.  He also hunted my clown gobies and was very good at catching them in the dark.