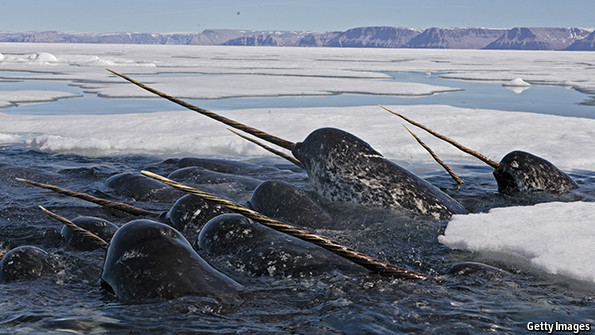 The tusks of Narwhal’s have had a rather mysterious history. Narwhals are medium sized whales from the Arctic waters off the Coast of Greenland, Russia and in Canada. Back in the 12th Century the Tusks would bring in quite a pretty penny since it was believed they came from Unicorn’s and were therefore magical. For centuries people have wondered the true purpose of the Narwhal’s tusk. Aboriginal people and scientists hypothesis that perhaps it was a weapon, a food finder, or even a indicator of male sexual prowess. Last month a team of researchers at the University of Manitoba decided to get to the bottom of the tusks purpose. Turns out the tusk is used to lure the ladies in. Basically it seems that a big tusk equals big balls and the whales with the biggest tusks get the most ladies. MORE