Thraustochytrids, the coral symbiont everyone should know. Part 2 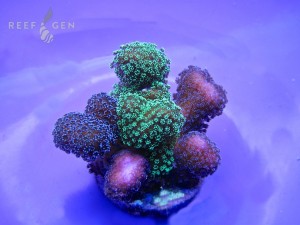 This is the second post in a series regarding Thraustochytrids and their symbiosis with coral.

Thraustochytrids are very interesting organisms to science and industry. Thraustos produce a large amount of fatty acids including HUFA, PUFA, MUFA, and DHA. They are being explored commercially for food additives and jet fuel among other products. So corals are growing jet fuel in their mucous, pretty neat.

As it turns out these organism are also very, very important for the health, survival and value of the coral we keep. Several studies of found greater than 90% of the organisms living in the mucous of the coral sampled are from Thraustochytrids. That is a significant amount, and underlines the importance of the mucous coat and its micro-organism balance in regards to the health of the coral.  Coral produce mucous which has some sugars that feed the Thraustos, which then produce copious fatty acids that the coral then eat. Also the mucous layer is often the coral’s first line of defense, especially from bacterial infection, or brown jelly.

Thraustos can be found either within the corals cells, with fungus like protrusions emanating from the coral like miniature porcupines, or living amongst the mucous coating of the coral. In the mucous the Thraustos provide nutrients for the coral and protection from against harmful bacteria and microorganisms. The intracellular Thraustos produces extensions, from specialized organelles called bothrosomes, which reach out from the coral cells, much like mycorrhiza fungus in plant roots. In plants mycorrhiza live within the plants roots, and absorb nutrients from the surrounding soil, especially those that the plant cannot take up by itself. It is believed that Thraustos serve the same function in this instance, providing more surface area for nutrient uptake, and absorbing nutrients that the coral cells themselves are not able to absorb directly.

Next post we will explore an interesting nutrient we have overlooked in our aquariums and how it may influence Thraustochytrids and coral survival.