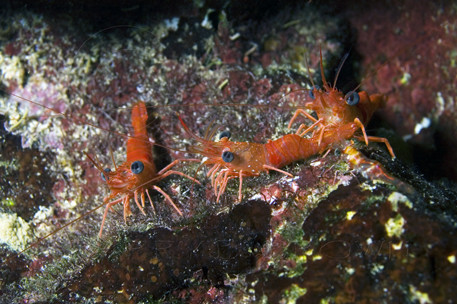 Here are three beautiful Red Night Shrimp, Cinetorhynchus manningi that Aimee and I found on our last night dive, hanging out in the shallows on a big rock. They usually have red bodies and may have white to tan bands and spots with dark green eyes. These shrimp are very common in Curacao. They inhabit coral reefs or shallow rocky areas and are considered nocturnal. They hide deep in the reefs by day and appear in large numbers at night.  When you shine your light on them, their eyes turn to a glowing shade of red; it’s really beautiful! These shrimp, like others, are very shy and will retreat into the darkness if approached, so getting photos can be very difficult at times! Previously reported as Rhynchocinetes ringens, which has been reclassified in the genus Cinetorynchus. The species C. ringens only inhabits the Eastern Atlantic.
MORE