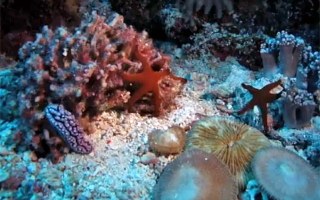 
Dr. Bongaerts of University of Queensland’s Global Change Institute recorded a variety of reef life on the Great Barrier Reef over the course of five years.  Thousands of independent photos were stitched together into this time-lapse video below, which shows:

Other footage include this sea cucumber “sniffing” out the sandy seafloor for detritus to eat:

… and corals attacking each other with deadly mesenterial filaments: