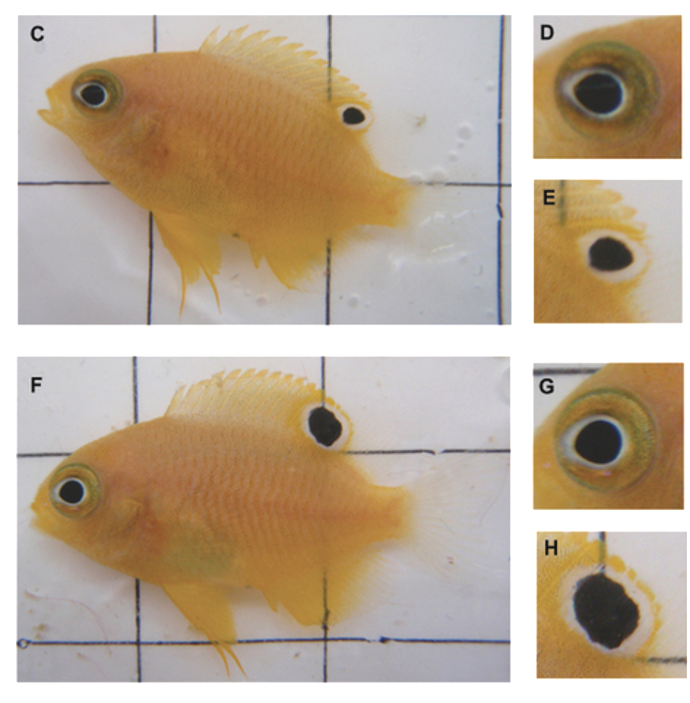 All prey fish exposed to predator cues over a 6 week period had significantly larger eyespots and smaller eyes than fish from the control treatments.

From the  ARC Center of Excellence: Coral Reef Studies:

Small prey fish can grow a bigger ‘eye’ on their rear fins as a way of distracting predators and dramatically boosting their chances of survival, new scientific research has found.

Researchers from Australia’s ARC Centre of Excellence for Coral Reef Studies (CoECRS) have made a world-first discovery that, when constantly threatened with being eaten, small damsel fish not only grow a larger false ‘eye spot’ near their tail – but also reduce the size of their real eyes.

The result is a fish that looks like it is heading in the opposite direction – potentially confusing predatory fish with plans to gobble them up, says Oona Lönnstedt, a graduate student at CoECRS and James Cook University.

For decades scientists have debated whether false eyespots, or dark circular marks on less vulnerable regions of the bodies of prey animals, played an important role in protecting them from predators – or were simply a fortuitous evolutionary accident.

The CoECRS team has found the first clear evidence that fish can change the size of both the misleading spot and their real eye to maximise their chances of survival when under threat.

“It’s an amazing feat of cunning for a tiny fish,” Ms Lonnstedt says. “Young damsel fish are pale yellow in colour and have this distinctive black circular ‘eye’ marking towards their tail, which fades as they mature. We figured it must serve an important purpose when they are young.”

“We found that when young damsel fish were placed in a specially built tank where they could see and smell predatory fish without being attacked, they automatically began to grow a bigger eye spot, and their real eye became relatively smaller, compared with damsels exposed only to herbivorous fish, or isolated ones.

“We believe this is the first study to document predator-induced changes in the size of eyes and eye-spots in prey animals.”

When the researchers investigated what happens in nature on a coral reef with lots of predators, they found that juvenile damsel fish with enlarged eye spots had an amazing five times the survival rate of fish with a normal-sized spot.

“This was dramatic proof that eyespots work – and give young fish a hugely increased chance of not being eaten.

“We think the eyespots not only cause the predator to attack the wrong end of the fish, enabling it to escape by accelerating in the opposite direction, but also reduce the risk of fatal injury to the head,” she explains.

The team also noted that when placed in proximity to a predator the young damsel fish also adopted other protective behaviours and features, including reducing activity levels, taking refuge more often and developing a chunkier body shape less easy for a predator to swallow.

“It all goes to show that even a very young, tiny fish a few millimetres long have evolved quite a range of clever strategies for survival which they can deploy when a threatening situation demands,” Ms Lonnstedt says.

Their paper “Predator-induced changes in the growth of eyes and false eyespots” by Oona M. Lonnstedt, Mark I. McCormick and Douglas P. Chivers appears in the latest issue of the journal Scientific Reports.