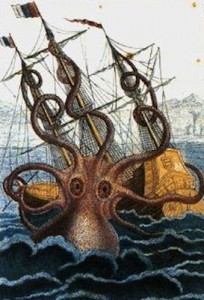 Well, maybe not the best day for EVERYONE, but it’s a pretty damn good day for me – we’re celebrating my favorite cephalopod of the deep today in honor of Octopus Awareness Day. Please, refer to this post I did the other day, and think twice before indulging in some grilled octopus in celebration. I asked Jared what his favorite thing about the Octopus was – his response? “It’s on your butt.”. Yes, I love the eight-armed superstar so much that I had it permanently “inked” on my backside. But lame puns aside, and believe me, I have many, let’s get to the festivities with eight of the most famous Octopi of all time! Scientific American’s blog, “Octopus Chronicles” delivers a breakdown of the eight most iconic Octopi out there, and I’m passing it right along to you. So without further ado – here’s our lineup – mythical, real, and psychic? Ok, then….

8. Billye: This hungry and curious giant Pacific octopus (Enteroctopus dofleini—or GPO for short) faced a pretty sticky challenge to get her snack: It was enclosed in a childproof jar. The lid to this container needed to be both pushed down and turned, but her human handlers at the Seattle Aquarium had no way of explaining that to her (and doubtful she read the instructions). On her first try, she was able to figure out the trick in 55 minutes. After a little practice, she could get to her treat inside in an average of about five minutes. Hide the rum bottles.

7. Puget Sound GPO: This giant Pacific octopus made headlines last year after meeting with a not-so-happy end: It lost a public fist/arm-fight with a diver off the coast of Seattle, Wash. Its demise, however, prompted a heated debate about whether octopuses should be fair game (they had been totally legal to catch there) to divers. And it drew uncomfortable attention to local restaurants serving these invertebrates.

6. Tellaro Octopus: One town in Italy has a very special reason to celebrate the octopus. Local legend has it that some 350 years ago a giant octopus saved the town from pirates. While villagers of this coastal town were living it up at a local celebration, a band of mauraders was approaching by sea under the cover of night. The local octopus purportedly reached a giant arm up out of the bay to ring the church bell, alerting the human residents who were then able to save their seaside village. The town honors its savior with octopus-inspired public art—and by listing lots of its cousins on local menus. All with reverence, of course.

5. Ozy: Unfortunately this one bears no relation to Mr. Osbourne. But this Ozy, a New Zealand octopus has some impressive skills all his own. He recently set the speed record for opening a jar: under a minute flat. Although this was not as complex a task as the childproof jar Billye faced a decade ago, the jar-opening-challenge is a popular puzzle to keep captive octopuses entertained. With a little practice, this resident of the Island Bay Marine Education Center in Wellington broke the one-minute barrier. Those are some fast suckers.

4. Kraken: We’ll make a small exception for the kraken. Although long a staple in seafaring lore (and literature—from the classic to the pulp), the giant octopus-esque sea monster (pictured above) sometimes flaunts squidlike features and may well be based on sightings of colossal squid (Mesonychoteuthis hamiltoni), which can reach some 14 meters. Real—okay, described—octopuses generally don’t reach more than a few meters. Certainly not large enough to pull down (and presumably eat) a merchant ship full of sailors.

3. Shark Killer: Octopuses might not be able to crush ships, but some of them can kill sharks. In 2011, the Seattle Aquarium had a mystery on its hands. In a giant marine enclosure, their small dogfish sharks kept turning up dead. So they decided to train a video camera on the tank to see what was happening. They soon witnessed a large giant Pacific octopus attacking and then strangling the shark before dragging its carcass away under its web.

2. Camouflage Master: Although this wild octopus remains nameless, its moves have probably been seen by more people than any other cephalopod in history. Biologist and octopus camo expert Roger Hanlon himself was even surprised when hefilmed this amazing camouflaging common octopus (Octopus vulgaris). The octopus looks, at first approach, so much like the plant-covered rock on which it is perched that to truly begin to appreciate its camouflage, a video of the encounter loops backward to see the octopus vanish in front of our eyes. The octopus uses color, pattern and texture to blend with its surroundings. You know you want to watch it again.

1. Paul: As in “Paul the psychic octopus,” of course. This uncommon common octopus, who lived at a German aquarium, managed to correctly predict the outcome of all of Germany’s seven matches in the 2010 FIFA World Cup—along with the winner of the final match between Spain and the Netherlands. Before each match, his keepers would present him with two clear plastic containers—each box bearing the flag of one of the teams and containing a tasty mussel. Followers considered Paul’s first pick of boxes to be his prediction. The odds of picking all of those matches correctly are about one in 256. Not too shabby for an invertebrate.

As cool as Paul is, I’m not quite sure why he gets top honors, personally I’d give that to Kraken. And Cthulhu doesn’t even make the cut, though I guess he’s not really on Octopus, just and “Octo-face”, so that’s forgiven. Anyway, cheers to my favorite creature in the whole wide world. Take a shot of some eight-year Glenlivet (do they make an eight-year? Oh yes, they do), “kraken” open your favorite octopus book (ok, last lame pun) and throw a cephalopod on your head, because today, we should all be #rossing. 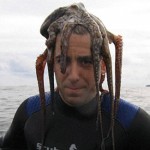 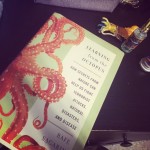