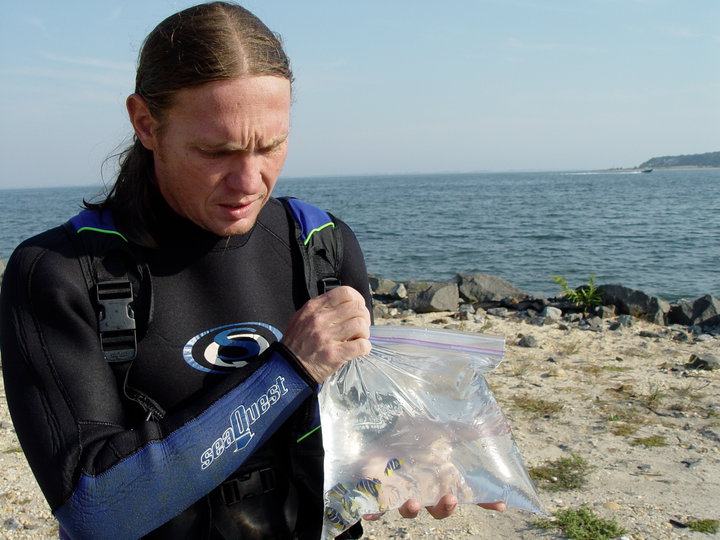 Saturday night Todd Gardner was named the 2013 MASNA Aquarist of the Year. This announcement was no surprise to many of us aware of Todd’s accomplishments. I have had the great honor of experiencing first hand the late nights and hard work that has gone into achieving many of those successes. I have lived through the excitement and seen the disappointments that inevitably precede those achievements. While there are many who may not know much about Todd besides his recent successes with Liopropoma sp., he has over 20 years in the industry and a list of accomplishments that is impressive even for someone with that longevity.

Todd has been keeping fish tanks since he was 6 years old. He earned a Bachelor’s Degree in Marine Biology from East Stroudsburg University in 1993 and a Master’s Degree in Biology from Hofstra University in 2004. However, this is just his résumé. The things that Todd has brought to the hobby are varied and plentiful, and although he’d never brag about them, as his wife I will brag for him.

Immediately following the completion of his Bachelor’s Degree Todd worked on the National Geographic film Lifestyles of the Wet and Muddy, where he collected and maintained specimens featured in the film. It was during this project that he had his first real successes breeding and rearing marine fishes, even before he starting working at C-quest, under Bill Addison, in the 1990s. However it was during his time at C-quest that he realized, and began preaching about, the benefits of copepod usage in aquaculture. He even wrote an article for FAMA on that topic in 1999, long before the advantages of utilizing copepods as a first food for larval fishes was considered common knowledge to most fish breeders. He left C-quest to pursue his Master’s Degree at Hofstra where he studied survivorship of Hippocampus  erectus fry when using Artemia vs copepods as first food. During this time he began working at Atlantis Marine World in Riverhead, NY. He was fortunate enough to have the support of his boss, Joe Yaiullo, who encouraged his breeding and provided him with the resources to continue this work. Though he only intended to work there for one year, it is only recently, 11 years later, that he accepted another position teaching Marine Biology full time at a local community college. He will now facilitate a close working relationship between Suffolk County Community College and the Long Island Aquarium. He is also developing the school’s first aquaculture course.

Todd is known mostly as a marine fish breeder and while his successes with breeding marine ornamental species are too vast to tackle in this post, there are some important highlights to note. He currently has 52 species of fishes to his name, six of which were industry firsts. He was also vital in developing techniques that brought dottybacks into commercial production. One little known fact is that Martin Moe’s Orchid Dottyback broodstock that inspired the book Breeding the Orchid Dottyback Pseudochromis fridmani: An Aquarist’s Journal, actually consisted of Todd’s babies! Recently, he has been focusing his energy on bass and basslets, successfully rearing the bicolor basslet (Lipogramma klayi), the swissguard bass (Liopropoma rubre), and the candy bass (Liopropoma carmabi). It is certainly worth mentioning that Todd has managed to raise most of these 52 species, including all of those of the past five years, using exclusively cultured foods. He believes in the importance of utilizing cultured foods rather than wild collected Artemia cysts or wild caught plankton. Additionally, Todd writes of his accomplishments, typically for Reefs.com or Reefs Magazine, with the intention of providing an instruction manual to those who also have an interest in the progress of this field. He is a firm believer in sharing of information so that others may use his findings to aide in their own successes. Anyone who has met him at a conference, stopped by the LI Aquarium to pick his brain, or reached out to him for assistance on their own projects knows that he is the first to offer advice, praise the progress of others, and commiserate about the frustrations of working with difficult species.

Not only is Todd an accomplished aquarist, but a truly kind and humble man. On a personal note, I can say that he is an amazing husband and a wonderful father. I cannot think of a more deserving person to be granted this honor. Today, as with every day, I am proud to be not only his wife, but his friend.