I absolutely love boxfish. It doesn’t matter what species, I love them all! I’ve had anything from the most commonly available Yellow Boxfish (Ostracion cubicus) to the more exotic Flame Boxfish (Anoplocapros lenticularis). 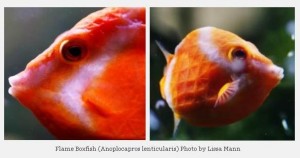 Most people have an understanding or have heard that boxfish can be poisonous to other fish when stressed. Knowing this myself, I still find it hard to avoid keeping them with other fish. Of the many species I’ve kept over the years I’ve had three incidents in which boxfish caused the death of other fish. The first incident was in 2008, when mysteriously fish were being found dead in the morning even though they showed no signs of issues. They behaved completely normal the day before. Having tested the water and took many actions to uncover the issue nothing appeared obvious. As a precaution, I added carbon filtration. The deaths stopped for 2-3 days. I thought it had passed when suddenly the deaths started again. At this point, my Large Male Whitley’s Boxfish (Ostracion whitleyi) stopped eating. This alerted me to the fact that it may have been releasing a toxin called ostracitoxin. I removed the fish and did a water change and replaced the carbon. The deaths no longer happened. 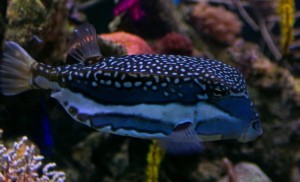 Because of the number of boxfish I kept in the past, I believed this was an isolated incidence (okay, maybe the lack of intelligence on my part contributed). I kept others without the fear of poisoning other fish. I went incident free until I moved from Manhattan to NJ and put a Flame Boxfish in a bucket with my prized filefish and a powerhead failed. Within minutes of the powerhead in the bucket failing, all of the fish were dead. Certainly not enough time for oxygen depletion to be the cause. The Flame Boxfish must have gotten stressed and released toxins.

As a result of the last circumstance I avoided boxfish for some time. It wasn’t until recently that I started keeping them with other fish again. I had a couple of male Blue Boxfish (Ostracion meleagris). One passed away without causing a problem. This built my confidence with keeping them in a community tank again. 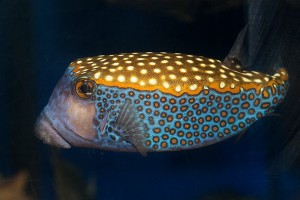 So now we get to the situation that prompted this post. I recently acquired a small female Whitley’s Boxfish. I started having unexplained deaths in my 240 gallon tank. Water changes and carbon did nothing to stop the issue. I removed the Whitley’s boxfish into another system and the deaths stopped. After a few days, the boxfish seemed to have no effect on the fish in its current system (mainly feeder fish). I then grew confident that the boxfish was not responsible for the deaths and moved it into a smaller display system. Everything was fine for a few days until I came home to a tank with all of the fish dead. No effect on clams, shrimp, startfish or corals. Oh, except a Helmet Cowfish (Tetrosomus gibbosus). The boxfish came back to haunt me again.