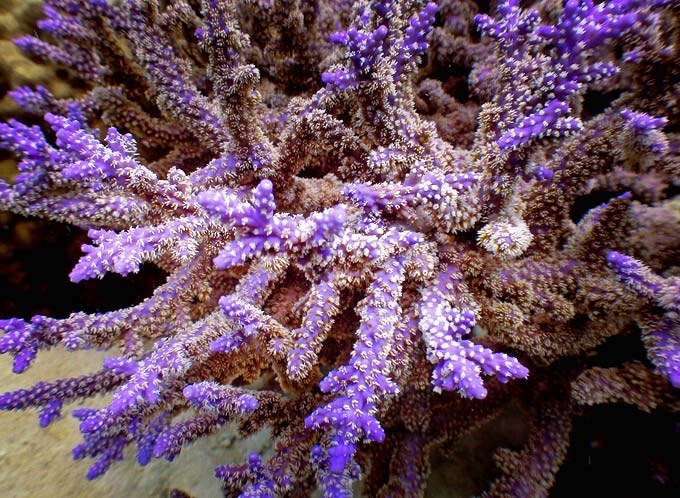 Can we train corals like this magnificent Acropora horrida to handle higher temperatures? Photo by Gareth

According to current theories, three variables explain why some corals are more tolerant to higher temperatures than others:

Past research has mostly focused on the first two variables.  Earlier this year, researchers from Hopkins Marine Station (at Stanford University) took advantage of the diverse back-reef lagoon pools of the American Samoa to conduct an experiment to focus on the latter two variables.

The study found that corals collected from the variable pools showed low mortalities when held at elevated temperatures, statistically indistinguishable from controls held at ambient temperatures.  Corals from the variable pools all hosted the heat-resistant clade of Symbiodinium.  On the other hand, corals from the moderate pools had a 50% mortality rate at the elevated temperatures, regardless of whether they hosted heat-sensitive or heat-resistant symbionts.

The researchers did not conclude how much of a role genes vs. environmental acclimatization play, but the study shows that corals exposed to high frequency, low duration heat stresses are “hardened” to prolonged heat stress.  This acclimatization mechanism suggests corals may cope with rising ocean temperatures better than previously thought.

Corals are able to shift symbionts in the wild – a process called adaptive bleaching.  Science is currently unclear whether corals innately harbor different clades of Symbiodinium (switching between dominant symbiont types depending on environment) or whether they adopt new strains of zooxanthallae from the water column.  If the former scenario is true or if we are able to culture heat-resistant Symbiodinium strains and introduce them to the water column, it may be possible to “train” corals to cope with prolonged higher temperatures via exposure to controlled HFLD heating.  Coral farms, for example, can propagate hardier, heat-resistant corals, all the while reducing energy costs related to cooling and consequently resulting in greater profitability: a textbook win-win scenario for farmer and collector.

Hobbyists with mixed reef display aquariums are cautioned against experimenting with HFLD heating on their systems.  Your corals may not harbor heat-resistant/tolerant zooxanthellae.  If corals adopt new strains of zooxanthallae from the water column, it is unlikely they will do so in captivity because the water column in closed systems are devoid of diversity.  Also, your tank’s other inhabitants (fish, crustaceans, echinoderms, gastropods, etc.) will suffer from the high frequency dynamic temperature shifts.

But the prospects of fostering heat-resistant corals are exciting!