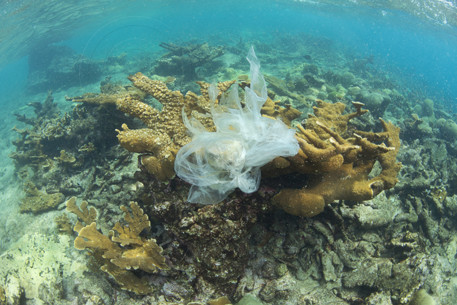 Good morning friends, you are looking at one of the most endangered corals on the planet it is being facing extinction due to global warming, storms, trash, boat anchors, and snorkelers. This very fragile, shallow growing Elkhorn coral is right in the path of just about everything bad and can’t seem to catch a break. Yesterday, we swam out to do a photo-shoot and immediately ran into this poor Elkhorn colony covered in nasty plastic! Because this coral was only in around six feet of water, removing the plastic was super difficult due to the passing waves creating a strong surge. I had a knife with me and had Aimee hold my camera while I fought the surge trying to cut it loose, I swear plastic with be the death of this whole planet! Once removed, you could see where the coral had choked to death and was now bleached white.

This is pretty much a common scene now a days and on most dives, I end up trying to save some part of the reef instead of taking photos, it’s really out of control. A few years ago we had a fairly nice outcrop of Elkhorns here at the Sea Aquarium but now after a few monster storms and serious bouts of temperature change 75% of them are gone, it’s really sad to see and to know that they most likely won’t be back as the weather is only getting worse. Please recycle…….