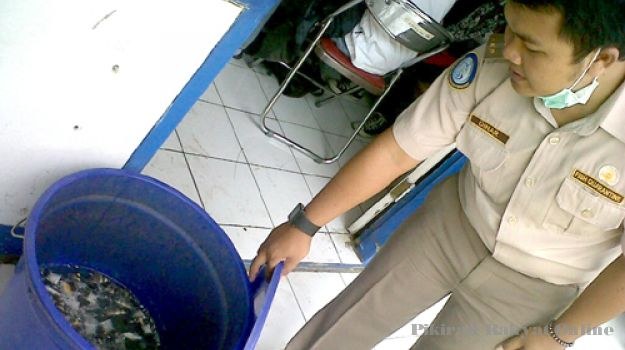 Undocumented fish being culled using formalin in the bucket at the Husein Sastrangegara Airport.

All the fish were culled.  As sad as it is to witness life being put down in this seemingly unjust manner, it is deemed by the Indonesian government as a necessary evil; The Fish Quarantine Unit is commissioned to destroy all undocumented livestock due to fears of infectious diseases that could endanger local fish populations.

This is not the first time Indonesia has taken measures to insure potentially harmful fish do not enter their borders.  In 2009 alone, they destroyed 342 Japanese Koi (which had tested positive for hepatitis).  That same year, they also destroyed approximately 3,000 fish from Malaysia due to the lack of official documents.  This is the first time in 2011 the Fish Quarantine Unit has had to cull fish (and hopefully last).