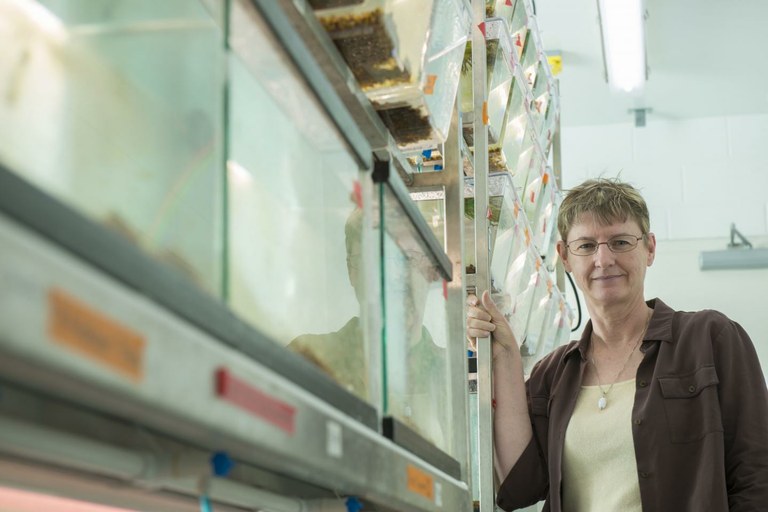 FSU researcher: Change in environment can lead to rapid evolution

A new Florida State University study is giving researchers a glimpse at how organisms from fish to flowers to tumors evolve in response to rapid environmental change.

The findings could have a broad ripple effect on a number of research areas, including climate change and cancer treatment. And it’s all because of guppies.

FSU Professor of Biological Science Kimberly Hughes and a team of researchers set out to find how this tiny tropical fish would evolve if they transplanted wild Trinidadian guppy fish from a stream with predatory fish into two-predator-free streams. Because guppies reproduce multiple times in a year, they were able to track three to four generations of the fish living in a predator-free zone.

The findings, published today in the academic journal Nature, were staggering.

By sequencing genetic material in the guppies’ brains, researchers found that 135 genes evolved in response to the new environment. Most of the changes in the gene expression were internal and dealt with a fish’s biological processes such as metabolism, immune function and development.

But more importantly, the immediate response of genes to change in the environment did not reflect the eventual evolutionary change.

Genes can change their activity levels in an immediate response to the environment — what evolutionary biologists call plasticity — or in an evolutionary response that occurs over many generations.

What Hughes and her colleagues found was that the evolutionary change in gene activity was usually opposite in direction to the immediate plasticity of gene activity. A gene that had changed in response to drastic change in the environment would then evolve in the opposite direction after a few generations.

“Some evolutionary theory suggests that plastic and evolutionary changes should be in the same direction,” Hughes said. “But our results indicate that at least in the very early stages of evolution, genes that respond in the ‘wrong’ way to an environmental shift are those that will evolve most quickly.”

Guppies are viewed as an ideal subject for evolution research because one year represents several generations for guppies. So, rapid evolutionary changes are often visible in a short period of time.

That makes these results interesting to scientists and raises big questions about how other organisms evolve in response to environmental changes.

For example, tumors face an environmental change when confronted with chemotherapy or radiation. Plants and animals face environmental changes with rising global temperatures. How do they change to live in these new realities or do they ultimately not survive?

“We know that organisms respond to changes in their environment at a very fast rate,” Hughes said. “They can acclimate. That includes organisms that are pathogens of humans and also includes things like tumors that adapt or acclimate to, say, chemotherapy. We can measure these fast changes in pathogens and tumors. We can measure that plasticity just the same way we did in the brains of guppies. And then we might be able to predict how the pathogen or tumor will respond to treatment over longer time periods. This could help medical researchers and doctors predict and avoid development of drug resistance in viruses, bacteria and tumors.”