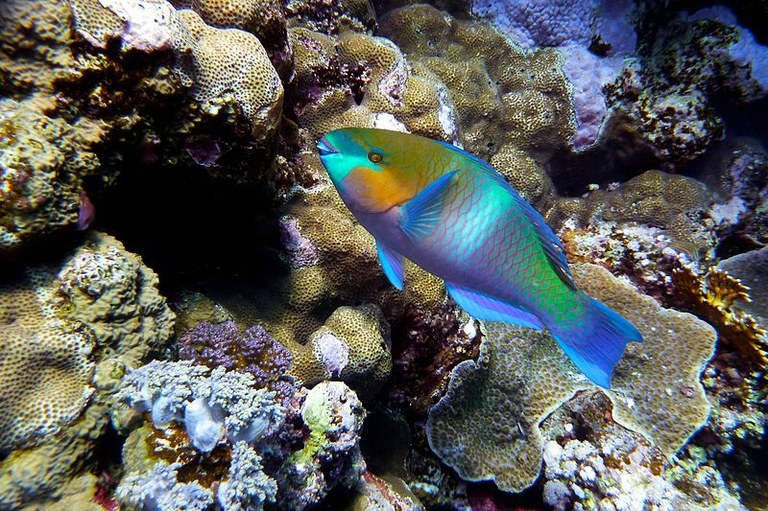 Tangs, rabbitfish, and parrotfish (above) are expanding their range into temperate waters. Photo by David Sandord (c.c.)


From the University of New South Wales

The migration of tropical fish as a result of ocean warming poses a serious threat to the temperate areas they invade, because they overgraze on kelp forests and seagrass meadows, a new study concludes.

The harmful impact of tropical fish is most evident in southern Japanese waters and the eastern Mediterranean, where there have been dramatic declines in kelps.

There is also emerging evidence in Australia and the US that the spread of tropical fish towards the poles is causing damage in the areas they enter.

“The tropicalisation of temperate marine areas is a new phenomenon of global significance that has arisen because of climate change,” says study lead author, Dr Adriana Verges, of the UNSW School of Biological, Earth and Environmental Sciences.

“Increases in the number of plant-eating tropical fish can profoundly alter ecosystems and lead to barren reefs, affecting the biodiversity of these regions, with significant economic and management impacts.”

The study is published in the journal Proceedings of the Royal Society B.

As the oceans have warmed and the climate has changed, hotspots are developing in regions where the currents that transport warm tropical waters towards the poles are strengthening.

Increased flow of the East Australian Current, for example, has meant waters south-east of the continent are warming at two to three times the global average. Tropical fish are now common in Sydney Harbour during the summer months.

Japan, the east coast of the US, northern Brazil and south eastern Africa are also strongly influenced by coastal currents that transport warm tropical waters.

“In tropical regions, a wide diversity of plant-eating fish perform the vital role of keeping reefs free of large seaweeds, allowing corals to flourish. But when they intrude into temperate waters they pose a significant threat to these habitats. They can directly overgraze algal forests as well as prevent the recovery of algae that have been damaged for other reasons,” says Dr Verges, who is also a member of the Sydney Institute of Marine Science.

Tropical fish expanding their ranges into temperate areas include unicornfish, parrotfish, and rabbitfish.

The study authors include researchers from Australia, the US, Spain, Singapore, the UK and Japan.

More than 40 per cent of the kelp and algal beds have disappeared since the 1990s, a phenomenon known in Japan as isoyake. Tropical species including rabbitfish and parrotfish appear to be mainly responsible.

Although these fish have been present for a long time, their annual grazing rates have increased dramatically as ocean temperatures in winter have risen. Corals now dominate the ecosystem in many locations. The changes have led to the collapse of the abalone fishery.

Tropical fish moved into the eastern Mediterranean from the Red Sea after the opening of the Suez Canal. In recent decades, rabbitfish numbers have increased, resulting in hundreds of kilometres of deforested areas and a 40 per cent decrease in the variety of marine species.

As the Mediterranean warms the rabbitfish are expanding their range westward, putting other shallow ecosystems at risk.

There has been a more than 20-fold increase in the number of parrotfish in the Gulf of Mexico – a species which consumes seagrass at five times the rate of native grazers. The number of plant-eating green turtles and manatees has also increased.

In Western Australia, emerging evidence suggests that increases in the number of tropical fish are preventing the recovery of kelp forest damaged by a heat wave in 2011.

In eastern Australia, kelp has disappeared from numerous reefs in the past 5 years and Dr Verges’ research suggests intense grazing by tropical fish on the kelp preceded this.